A collection of 40 works by the painter Frank Auerbach collected by his friend and fellow-artist Lucian Freud have been allocated to museums and galleries across the UK. The allocation has come through the Acceptance in Lieu scheme administered by Arts Council England.

Five works are coming to the Fitzwilliam Museum. These sketches by Auerbach were sent as birthday cards to Freud with personal messages. The comments include ‘Dear Lucian, This very ill-timed Birthday present. I have just been in to Paxton & W. [Whitfield] And wanted to get a ham before they Sold Out. Love Frank. P.s Many Happy Returns of the 8th’ and ‘Dear Lucian Very Many Happy Returns of next Wednesday (they say that they can only deliver today) Love Frank’.

One of the sketches depicts Auerbach and Freud having breakfast in the Cock Tavern in east London, but there are also sketches of important paintings in progress, including Freud working on the painting The Benefits Supervisor Sleeping (1994) and a sketch of Auerbach’s painting After Ruben’s Samson and Delilah (1993).

The five drawings will join the Fitzwilliam’s collection of 51 works by Auerbach, which includes an important painting, sketchbooks and a complete set of his prints.

The Fitzwilliam Museum's collection of Frank Auerbach's prints was initiated in 1994 with the gift of two etchings from Ruth and Joseph Bromberg in memory of their son Michael. The collection was then transformed by an extraordinary donation from James Kirkman of the remainder of the artist's prints to date (together with two sketchbooks). The Fitzwilliam has been able to keep the collection up to date into the twenty first century entirely due to Frank Auerbach himself, who has donated an impression of each new print on completion.

The allocation of the full 40 works by Auerbach across the country is the largest ever single Acceptance in Lieu. The whole collection was shown in temporary exhibitions in Manchester and London. Now, every part of the UK has benefited following a recommendation of the Acceptance in Lieu Panel to ministers in England, Scotland and Wales. 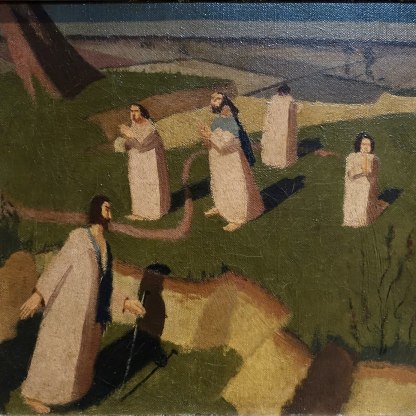