Life-size mannequins, dolls and over 180 remarkable artworks from collections across the world will be going on display in Cambridge for the Fitzwilliam’s next major exhibition Silent Partners: Artist and Mannequin from Function to Fetish.

Opening on Tuesday October 14, Silent Partners is the first exhibition ever to uncover the evolution and widespread use of the artist's mannequin, or 'lay figure'. It will show how, from being an inconspicuous studio tool, a piece of equipment as necessary as easel, pigments and brushes, the lay figure became the fetishised subject of the artist's painting, and eventually, in the 20th century, a work of art in its own right.

From the Renaissance onwards mannequins were used by artists and sculptors to study perspective, arrange compositions, 'rehearse'; the fall of light and shade and, especially, to paint drapery and clothing.

The world of the mannequin was strange, surprising and riddled with contradictions. Artists at once recommended them and warned of the dangers of their over-use. In 19th century Paris, the centre of the mannequin-making industry, extraordinary levels of inventiveness were devoted to making and 'perfecting' the life-size mannequin, with the aim of making it an ever-closer approximation of 'the human machine'. Available as female and children, these figures were eerily realistic with articulated skeletons and padded exteriors, designed to have increasingly fluid movements only to be keyed into position to retain a pose. Paradoxically, even Realist painters like Gustave Courbet and the Pre-Raphaelites used these artificial figures to make their paintings 'truer' to nature.

Studio secrets of the artist-mannequin relationship - some unexpected, others downright shocking - will be revealed through works by painters such as Fra Bartolommeo, Thomas Gainsborough, David Wilkie, Paul Cézanne, Ford Madox Brown, Walter Sickert and many others. Who would guess that John Everett Millais hired a child mannequin with an optionally attached head to stand in for his daughters in two enchanting paintings of children’s bedtime? More bizarre and disturbing is the account of Oskar Kokoschka and his custom-made love doll 'fetisch', in the image his ex-lover, Alma Mahler: an object of erotic longing he generated first to worship, then to eliminate.

The exhibition also includes photographs by and of Surrealist artists such as Man Ray, Hans Bellmer and Salvador Dali; works by Jake and Dinos Chapman show that, even today, artists continue to be drawn to the creative potential unleashed by our artificial Others.

Silent Partners will feature a diverse range of works: paintings and drawings, books, dolls, films, a series of extraordinary patent documents and videos that will surprise and at times disturb. But among the most striking and fascinating exhibits will be the mannequins themselves: from beautifully carved 16th century small-scale figurines to haunting wooden effigies, painted dolls of full human height and top-of-the range 'stuffed Parisian' lay figures that were sought after by artists throughout Europe.

Silent Partners will be travelling on to the Musée Bourdelle, Paris following its run in the UK, and is accompanied by a lavishly illustrated book published by Yale University Press.

The exhibition forms part of the festival Curating Cambridge from 20 October to 23 November 2014. 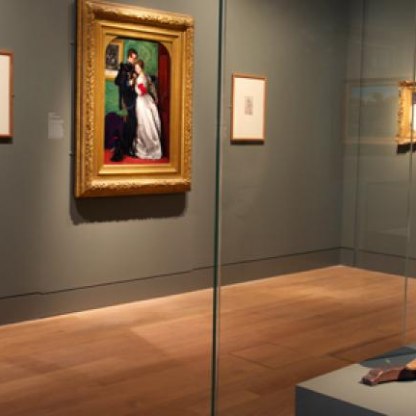