The Kiss of Judas, is one of the rarest artworks of its type; a medieval English panel painting. At the time of the Reformation, beginning in the 16th century and later during the English Civil War, church paintings were destroyed in their thousands - few survive across the UK.

The painting has been given a new lease of life after conservation at the Hamilton Kerr Institute, and is now on display in the Fitzwilliam Museum’s Rothschild Gallery of medieval works.

Painted in bright oil colours, with details picked out in silver and gold leaf, the lively scene from c.1460 is all the more astonishing as it depicts the moment of Christ’s betrayal by Judas Iscariot.

Devout Catholic parishioners often scratched and gouged at the hated figure of Judas, so this painting would have been at risk from Catholic and Protestant alike in its time.

The painting was purchased by the Fitzwilliam Museum in 2012 from the Church of St Mary, Grafton Regis, Northamptonshire. The Church of St Mary was able to repair its roof and other features with the proceeds of sale and a replica of the picture will be displayed there.

When the panel arrived for conservation treatment it had a considerable layer of surface dirt, bat faeces and heavily discoloured varnish which made it difficult to see the image.

But, it was a discovery on the back of the boards that revealed the remarkable story of how the painting survived.

The reverse was covered with a fairly modern backing board of plywood - when the conservator Dr Lucy Wrapson removed this, she found the back of the planks making up the painting had, under close inspection, faint traces of writing.

16th century lettering was revealed using infra-red photography, proving the painting had been recycled at the time of the Reformation, the offending image turned around and the back converted into a painted board. It is thought that it may have listed the 10 commandments, typical of a Protestant church furnishing.

The Funerary Achievement of the Church of St Mary the Virgin, Fowlmere 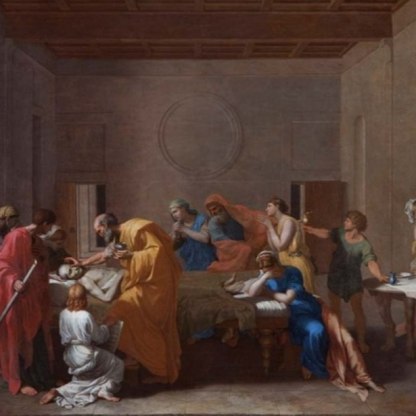