Masterpieces of the Dutch Golden Age back on display

The gallery of Dutch Golden Age paintings has gone back on display this week following full refurbishment, with new surprises including the revelation of a beached whale previously painted out of an airy coastal view of Scheveningen, a spectacular metre-high blue and white vase, and new displays evoking seventeenth-century domestic interiors.

One of the most popular galleries in the Fitzwilliam, now visitors will be able to enjoy the works even more as the selection of paintings on display has changed to tell distinct stories about this era in different groupings: beautiful landscapes in the Low Countries, dramatic seascapes and naval battles, famous cities visited by Dutch painters throughout Europe, mythological tales, and dazzlingly realistic still-life paintings of fruit, flowers and insects.

A small group of works by Dutch fijnschilder (fine painters) show their extraordinarily detailed rendering of fabric and furnishings, and capture the intimate atmosphere of the Dutch interior. Insight into the privacy of seventeenth-century domestic life was one of the most appealing aspects of the Fitzwilliam’s hugely successful exhibition Vermeer’s Women, which attracted a record breaking 150,000 people in 2011.

Visitors will be able to enjoy furnishings such as richly carved wooden chairs, chests, games tables, and armchairs with embroidered covers intermingled with paintings that show how they might have been placed in their original settings. Much of the furniture is English, showing the similarities and connections between Dutch and British design in this period.

Many of the paintings on display come from the bequest of the Founder, Richard, 7th Viscount Fitzwilliam (1745-1816), who inherited a significant group from his maternal grandfather, Sir Matthew Decker. A spectacular example of this collection is a painting by Theodorus Netscher of a pineapple, commissioned by Decker to celebrate his horticultural triumph of growing the first viable crop of the fruit ever produced in England.

A highlight of magnificent displays of blue and white Delftware is an extremely rare, large and highly ornate flower vase dating from about 1690. Although frequently referred to as a ‘tulip vase’ this type of vessel was designed originally to display mixed bouquets, as shown in its silk flower arrangement, where variety in terms of colour, species and scent was the key.

The central cases of the gallery contain a selection of rare prints and drawings, including works by Rembrandt, Hendrik Goltzius and a landscape by John Constable, which highlights the indelible influence of seventeenth-century Dutch painters on one of our greatest British landscape artists.

While the refurbishment of the gallery was underway a number of artworks were sent for treatment to the Museum’s Hamilton Kerr Institute, which specialises in the conservation of easel paintings. During restoration, conservators discovered in one of these a whale that had been hidden under layers of paint for over a century. The story of the restoration of View of Scheveningen sands, with a stranded sperm whale, c.1641 by Hendrick van Anthonissen will soon be available to see in a four minute film on the University of Cambridge website.

The gallery has been closed since July 2013 as part of a series of major works to the fabric of the building over the past year. The former brown silk wall coverings had not been replaced for over thirty years and were fading. They have been replaced with a new covering in a soft green tone that is more sympathetic to the paintings and furnishings. All the woodwork, including the skirting and floors has been returned to its original high gloss shine, and a new lighting design has illuminated the works in much greater detail with LED lights that are also energy efficient.

Invisible to the public the main body of work has been to improve the environmental conditions of the gallery, both to protect the paintings and to reduce the Museum’s carbon footprint. Full details of these new systems are set to be announced in July when the final part of the project is completed and the adjacent Charrington Print Room opens.

The main building works of the Fitzwilliam Museum will finish at the beginning of July in time for the passing of La Tour de France through Cambridge, with the Museum’s portico, lawns and railings fully restored. 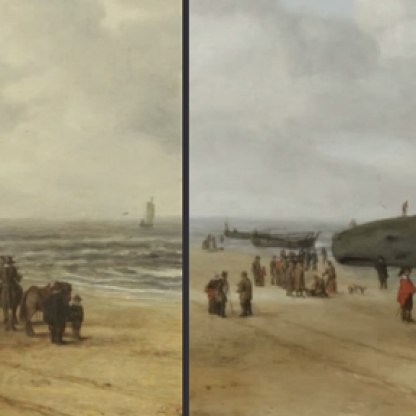