This self-portrait by the Dutch painter Maarten van Heemskerck shows just how much the status of the individual artist had changed since the fifteenth century. No longer simply an employee working for a patron, the painter here has made himself the chief subject of his own work.

Heemskerck's proud and serious face dominates the foreground. An imposing, soberly dressed figure, he looks us directly in the eye, his brow slightly furrowed. The impression is of an intellectual, of someone who works with his mind as much as his hands, and this tallies with what is known of this artist's life. In the year that he painted this work, Heemskerck was the Dean of the Painters' Guild of St Luke in Haarlem. Later in life he was elected as one of the Fathers of the city. He was a wealthy landowner and an associate of some of the leading Dutch intellectuals of his day.

In 1532 Heemskerck travelled to Italy and spent several years in Rome. Once there, according to an early biographer,

he neither slept away his time, nor neglected it in the company of other Netherlanders with boozing. But instead he copied many things, as much after antiquities as after the works of Michelangelo – also many ruins, ornaments and all kinds of subtleties of the ancients which are to be seen in abundance in this city, the painters' academy.

Many prints were made from these drawings, and Heemskerk's Roman work became one of the chief sources for northern European artists unable to make the journey to Italy themselves. In the late sixteenth century, many Netherlanders saw Rome through Heemskerck's eyes.

This painting was in fact made sixteen years after the artist's return from Italy. Classical ruins abound in Heemskerck's work, but he seems to have had a particular fondness for the Colosseum, the great amphitheatre in Rome completed by the Emperor Titus in 80 CE. In a series of drawings, he depicted the Colosseum as the eighth Wonder of the Ancient World, though he presented it, as here, in its ruined state.

In the middle distance, in front of the amphitheatre, seated on a stone block, a figure is seen sketching the architecture. He holds an inkpot and quill and rests a sketchbook on an easel. He too has a long dark beard and it is likely that this is Heemskerck himself.

So the artist has depicted himself twice, in two different roles. Once as the diligent worker, putting in the fieldwork, engaged in drawing. And once more as the proud artist, the creator standing before his work, seeing that it is good.

It is noteworthy that the lower left corner of the cartellino on which Heemskerck has signed and dated the painting is obscured by his black tunic. We are looking therefore at a painting within a painting. Is the artist posing before an image of what he saw as his finest and most important contribution to art?

This sense of pride is made even more explicit in a print in the Fitzwilliam in which Heemskerck compares himself with Apelles, the great ancient Greek artist who since Roman times had been a byword for painterly excellence. 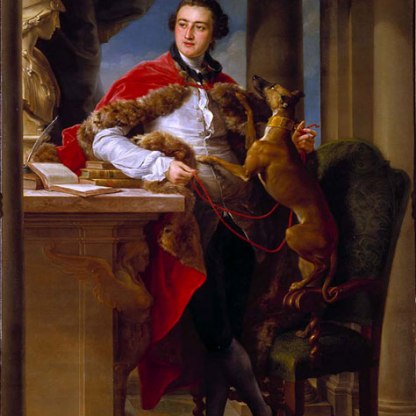 Self portrait, with the Colosseum behind, 1553