These words, part of a popular medieval hymn of praise to the Virgin Mary, are written in Latin at the top of the page facing this manuscript illumination. A magnificent image of divine motherhood, its grandeur is all the more remarkable for its small size. The illuminated page comes from a Book of Hours, a compilation of prayers and readings popular among lay people in the fourteenth and fifteenth centuries. The Hours of the title refer to the eight canonical hours of prayer in the Christian day.

Here, seemingly suspended in a void of ultramarine, a complex architectural structure contains a statuesque Virgin holding the Christ Child. This is clearly no earthly scene. The laws of perspective, time and scale count for nothing here, and the decorative elements serve only to express the divine majesty of the mother and child.

The chequered floor of the vaulted, star-fretted chamber rises steeply behind the Virgin and, with her ivory-coloured dress, forms a triangle that culminates in her radiant head. The architecture is alive with angels and prophets. And yet in the tenderness of their shared gaze, the artist also manages to suggest the humanity of the pair.

On either side of the Virgin are depicted scenes from her early life. At the left, we witness her marriage to Joseph, a white-bearded old man clad in a lavish, blue, ermine-lined robe. Three other men look on as a priest, wearing a papal tiara, joins the hands of the couple. Above, two more men lean out of a window and point towards the scene, while an angel, balancing above an arch, blows into a huge trumpet (detail, right).

At the right of the picture, we see the Presentation of the Virgin in the Temple. The Golden Legend, a popular medieval collection of saint’s lives, tells how, when her parents took her to the temple for the first time, the three-year-old Mary climbed the fifteen steps that led up to the building unaided. Left, we see Joachim and Anna watch their daughter – here looking rather older than three – as she is welcomed into the Temple by the High Priest, Zacharias.

This manuscript is probably the most fulsomely decorated of the many Books of Hours in the Fitzwilliam Museum Library. In all, 528 figured illustrations are distributed over its 234 pages, 24 of them full-page miniatures that mark the main divisions within the book. In addition to the larger miniatures, there are four continuous series of marginal pictures illustrating the Apocalypse of St John, and the 'Three Pilgrimages' by the fourteenth-century monk-poet Guillaume de Deguileville. The pilgrimages are those of Jesus Christ, Man’s Life and the Human Soul.

There is also, as is customary in a Book of Hours, a calendar listing the feast days of the Christian year. In this section, the artist has depicted the signs of the zodiac and the work done during the changing seasons. December, for example (folio 12r, left) is illustrated with a unicorn, standing here unusually for Capricorn, while at the top of the page we see a man slaughtering a pig.

Although the book is the product of a workshop, with several different artists decorating different parts, the most important images have been attributed to a painter known today as The Rohan Master. He is so called for his work on a magnificent Book of Hours in the Bibliothèque Nationale in Paris, which bears the arms of the Rohan family.

The Rohan Master is thought to have spent time working in Paris, and his painting betrays the influence of the great fourteenth-century illuminators of that city, the Limbourg brothers and Jacques Coene – 'the Boucicaut Master'. But he has also been linked to the Angevin court in Anjou in the west of France, and it has been suggested that Queen Yolande of Aragon commissioned this Book of Hours for her daughter. In the fifteenth century it came into the possession of Isabella Stuart, Duchess of Brittany. It is her coat of arms that we see on several of the pages, for instance in each corner of folio 134r, left.

MS 62, The Hours of Isabella Stuart One of the most extensively illustrated Books of Hours in existence, this volume contains a unique, highly personalised combination of images and texts. It was completed by 1431 for the learned and powerful Duchess of Anjou, Yolande of Aragon (1381-1442). Over the next three decades, the manuscript belonged to three other women and was continuously adapted to suit their devotional needs and dynastic aspirations. The manuscript, a personal prayer book, contains over 500 figural scenes and other forms of decoration. It was illuminated by professional artists working in Angers for Yolande of Aragon, Dowager Duchess of Anjou. She probably gave the volume to her daughter, Yolande of Anjou (1412-1440), around the time of her marriage to the future Duke Francis I of Brittany in 1431. After her death, the volume came into the possession of Francis’ second wife, Isabella Stuart (1427-after 1494), and then passed on to their daughter, Margaret of Brittany (1443-1469). We do not know the names of the artists who worked on this impressive volume, but we can distinguish different hands through changes in styles. Recent scientific analysis of the pigments used support the attributions made on stylistic grounds. Breton artists working in Nantes adapted and added illuminations for Isabella and Margaret, and variations in the underdrawings and the use of different pigments help to distinguish between their work and that of the original artists based in Angers. 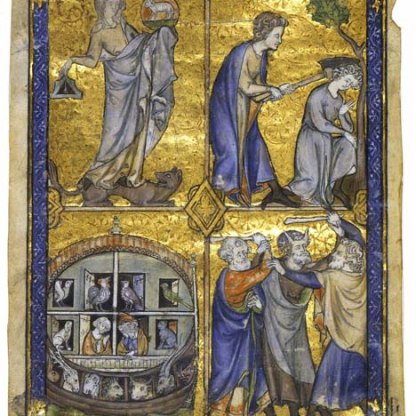 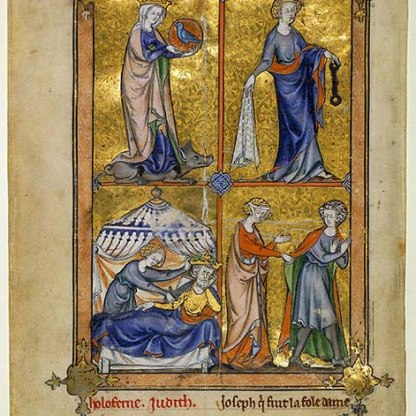 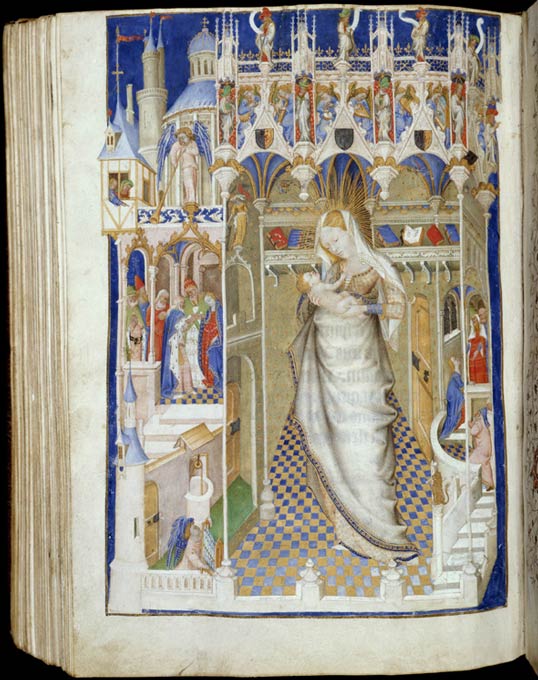