The Fitzwilliam Museum owns more than 400 pieces of armour, including horse armour. The majority of the armour collection is European plate, although armour from Asia and the Middle East is also represented, including samurai armour, Indian chainmail and Ottoman plate. Best represented is sixteenth-century armour from Germany and North Italy, mostly field armour but with some tournament and parade examples. The collection includes several complete and half sets of plate as well as ornamental helmets and pieces from partial or non-associated sets of armour. A limited number of shields is also held in the Fitzwilliam collection, as well as examples of miniature model armour.

The Fitzwilliam Museum Armoury also holds a varied collection of approximately 350 pieces of weaponry, and is particularly strong in medieval European bladed weapons. Objects include a variety of bladed and spiked melee staff weapons, crossbows and their accessories, small cannon and cannon-balls, daggers, maces and a lance. There are swords of several different types including broadswords, ‘hand-and-a-half’ swords, sabres, rapiers, ceremonial swords, and a small sword for a child. Specialised swords from different countries are also included, especially from the Islamic world and Asia.

The bulk of the Fitzwilliam’s European arms and armour collection was the result of a single generous bequest from the private collection of Mr James Henderson, largely assembled during the 1920s from the collection of the Princes Radziwiłł at Nieśwież in Poland. Subsequent to this bequest, further items from this original collection have joined the Fitzwilliam, creating what is now considered to be one of the finest collections in England, second in range and quality only to the royal and national collections. 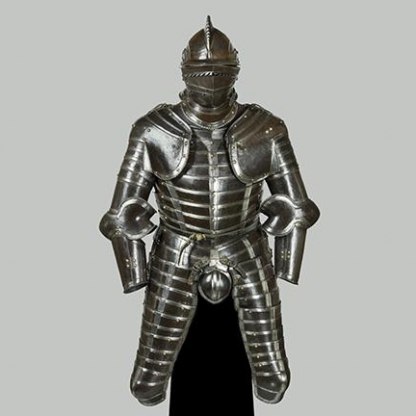