Look, think, do: A Pony, in a landscape

A Pony, in a landscape

Rosa Bonheur was widely considered to be the most famous female painter during the nineteenth century. She was born in Bordeaux, France, in 1822 and was the oldest child of a family of artists.

Bonheur had a difficult time learning to read, but her mother taught her how to read and write by asking her to draw a different animal for each letter of the alphabet. This is what spurred her early love of animals and at the age of twelve she settled on being a painter with her father. By nineteen, Bonheur began to exhibit work and by the time she was thirty she could afford a chateau in Fontainebleau with the money she made from selling paintings. At her chateau, she kept a menagerie of animals to draw from.

Her most ambitious and famous work, The Horse Fair (The Metropolitan Museum of Art, New York) was exhibited in the Paris Salon in 1853 and she later painted a smaller version which is now at the National Gallery, London. In preparation for this work Bonheur went twice a week for a year and a half to the horse fair to sketch the horses and male horse handlers. In order to do this she applied for a special permit to disguise herself in male clothing, and cut her hair short. She explained: “The costume was a great protection to me my skirts would have been a great hindrance, making me conspicuous and people making foul remarks. It was easier to be taken as a young lad.”

Her work was more popular in England than her native france but she was awarded the French Legion of Honour by the Empress Eugénie in 1865, who is known to have commented ‘genius has no gender’. She was the first female artist to be given this award.

Rosa Bonheur lived with her first partner, Nathalie Micas (C.1824-1899), for over 40 years until Micas' death. She later began a relationship with the American painter Anna Elizabeth Klumpke (1856-1942). Bonheur spoke about her personal life and her female partners openly and with great passion: this was groundbreaking at the time. She viewed men as stupid and mentioned that the only males she had time for were the bulls she painted. She was buried together with Nathalie Micas at Père Lachaise Cemetery, in Paris, where Klumpke was also later buried.

Bonheur's legacy paved the way for other lesbian artists who didn't favour the life society had laid out for them. You can find out many more facinating LGBTQ+ connections across the University Cambridge Museums on the Bridging Binaries web pages.

Take a close look at Rosa Bonheur's realistic drawing.
Imagine you are holding a pencil in your hand. Follow the lines she has made in the air?

Most of the landscape is missing in this drawing. Imagine the habitat this pony is living in.

What colours, objects, plants and people would you add?

When Rosa was a little girl her mother taught her the letters of the alphabet by drawing an animal for each one.

Pick three letters and draw animals for each of them: What animals will you choose?

A Pony, in a landscape 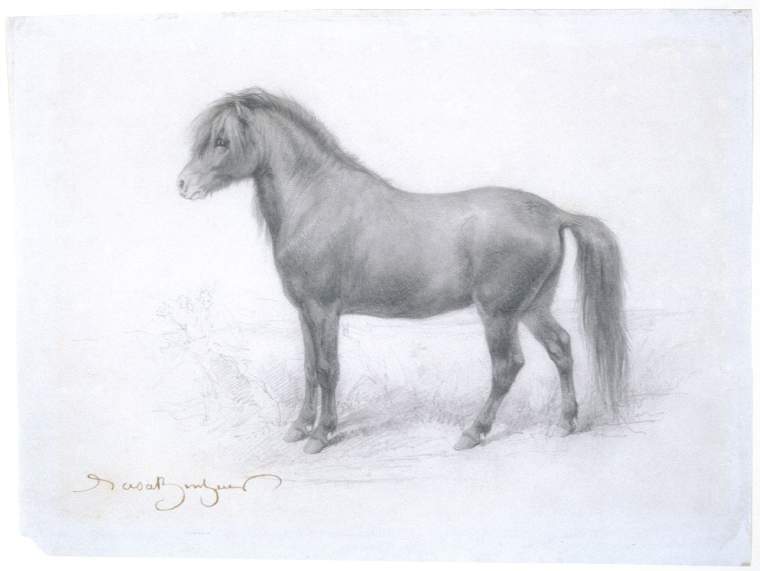