The Fitzwilliam focuses on the prints of Whistler

Our major show, Whistler & Nature is now closed (8 January to 17 March 2019), but there are still plenty of opportunities to connect with James McNeil Whistler at the Fitzwilliam. The Gentle Art: Friends and strangers in Whistler’s prints continues in the Print Room until 12 May 2019.

Focusing on people, the range of etchings, drypoints and lithographs from the Fitzwilliam’s collection include the early French set, intimate domestic scenes of friends and fellow artists in London, and late lithographs of nudes and portraits of Birnie Phillips, ‘Bunnie’, Whistler's sister-in-law.

Also this summer look out for, Palaces in the Night: The urban landscape in Whistler’s prints, 4 June - 8 September 2019. The exhibition explores Whistler's progression from crisp realism to atmospheric impressionism through the cityscapes he produced from the mid to late 19th century.

In 1855, at the age of 21, Whistler left America to study art in Paris. He never returned to his homeland but instead settled in London, where he made his name as an artist. Palaces in the Night offers the opportunity to see a spectacular impression of The Doorway - one of a series of twelve prints known as the First Venice Set. First etched in 1879-80 and published by The Fine Art Society, Whistler intended to print 100 impressions of The Doorway at one shilling a pop. But by his death in 1903 only 84 had been printed, 16 short! The remaining prints were completed by Frederick Goulding for Bunnie, Whistler’s executrix in 1903, after which the plates were cancelled and given to the University of Glasgow (Hunterian Art Gallery).

Fitzwilliam focuses on Whistler's Palaces in the Night

Whistler studies allocated to The Fitzwilliam 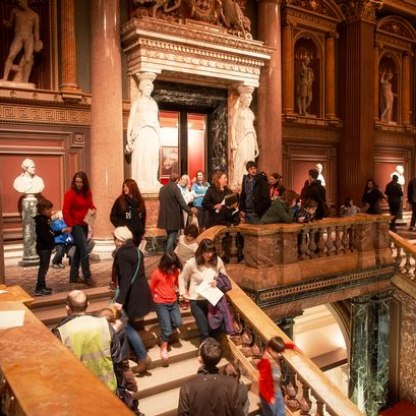 February half term week at the Fitzwilliam 2019