The German Reformation leader Martin Luther, a contemporary of the Netherlandish painter Joos van Cleve, once said,'you can't drag Christ down too deeply into our human nature'. In this respect at least artists, particularly in northern Europe, practised what Luther preached. By the time Joos van Cleve painted this affectionate and intimate image, the Madonna and Child were being shown in more recognisably domestic settings than ever before.

Here a green Flemish landscape, containing a farm, is seen through the two windows behind Mary. On one side a shepherd tends his sheep. Hills recede into the distance.

Neither mother nor child have haloes to signify her sanctity or his divinity. And although there are hints at a certain amount of material wealth - Mary's brilliantly painted fur-lined, red cape (detail, left), the vase resting on the marble ledge, the richly decorated drape behind her - this Madonna is no imperious Queen of Heaven. Our reaction to the pair is not so much one of awe, as of happy recognition. What could be more human than a mother offering her breast to her child? Or that same child drowsing in his mother's arms? Another Virgin and Child by van Cleve in the Fitzwilliam, right [M.17], shares something of the same tenderness and charm.

This is a serene and happy image, and the emotional tone is set by the faint, loving smile that plays upon Mary's lips. This smile and the soft blending of the light and shadow - the sfumato technique - was probably inspired by the work of Leonardo da Vinci, which van Cleve would have seen when he was court painter to Francis I of France.

But beneath the surface charm are hints at the death the child must suffer on the cross, reminders of the sacrifice and redemption offered by this God who has become man. The position that Christ unconsciously adopts here, lying diagonally in his mother's arms, his eyes closed, his left arm hanging limp, recalls the posture of his corpse in Pietà scenes, where his crucified body is held by Mary prior to its burial. He appears thus in an illumination from a c. 1500 French Book of Hours in the Fitzwilliam, left [MS.131.f.333].

The vessel on the marble shelf to Mary's right contains four tall white lilies, the traditional symbols of the Virgin's purity. But beneath the lilies there are dandelions. Even today these flowers are believed to promote the production of milk in a mother, and so are perhaps appropriate to this picture. But in the Bible, dandelions are associated with suffering. The flower was one of the 'bitter herbs' traditionally taken with the sacrificial lamb at the Jewish Passover. They allude here to Christ's death upon the cross, that also took place at Passover - for Christians the ultimate sacrificial event.

Finally, just outside the line of trees, on top of the gently sloping hillside on which a shepherd guards his flock, a rustic cross is just visible against the lighter ground in the distance. Within the same picture Joos van Cleve emphasises Christ's humanity and looks forward to his earthly death. 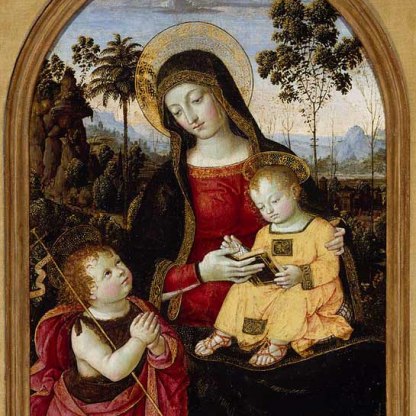 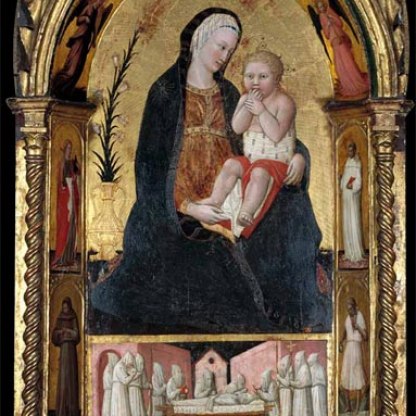 Virgin and Child with an Orange - Christmas card pack 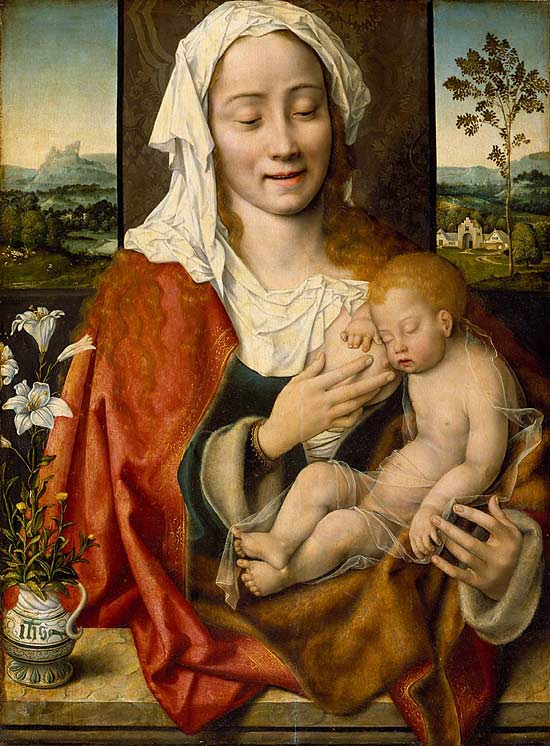