Despite his 'surname', which means 'the Venetian', Domenico Veneziano was a key figure in that remarkable group of artists working in Florence in the first half of the fifteenth century under Cosimo de'Medici. He was a contemporary of Filippo Lippi and Fra Angelico. The great Piero della Francesca is thought to have been his pupil.

Few signed works by Veneziano survive, and his reputation today rests chiefly upon the magnificent St Lucy Altarpiece, painted in the mid-1440s for the small church of S Lucia de'Magnoli in Florence. The two panels in the Fitzwilliam once formed a part of this, and their comparatively small individual sizes belie the grand scale of this key work of the Florentine Renaissance. They were originally part of the predella, a strip of smaller paintings supporting a much larger panel.

Predellas usually featured episodes from the lives of the saints shown on the painting above. And so it was on the St Lucy Altarpiece. The main panel, now in the Uffizi in Florence, left, shows the Virgin and Child flanked by Sts Francis, John the Baptist, Zenobius and Lucy. This type of picture, in which the saints are seen sharing the same space as the Virgin and Child, is called a sacra conversazione – 'holy conversation' – and was a relatively new development in Florentine art when Veneziano decorated his altarpiece.

The Fitzwilliam panels were originally placed beneath the figures of the Virgin and Child and St Zenobius respectively. Before the altarpiece was dismantled, one would have been able to follow the pointing finger of the Archangel Gabriel, and the praying hands of St Zenobius, up to the figure of the Christ Child on the Virgin's knee. So, the predella figures draw attention to the chief focus of the altar: Christ, the Redeemer, who answers those who address him in prayer.

The Annunciation panel has at some point in its history been trimmed at the left, thus upsetting the careful symmetry of the architecture – the illustration, left, supplies the missing portion. But even with this loss, the supreme balance of the painting is still clear. It is an excellent example of the use of linear perspective, the suggestion of three-dimensional depth on a flat surface. Veneziano's figures enact their stories in convincing architectural spaces: the loggia – arcade – in which Mary stands, and the brilliantly realised Florentine street that recedes into the background behind St Zenobius.

The visitor to the Fitzwilliam today can get a far closer look at these panels than the congregation for whom they were painted ever could, and close inspection reveals something of Veneziano's technique. Incised lines on the surface of the picture clearly show how he planned the composition. There is a tiny pin-prick visible in the exact centre of the picture, where the bottom of the upper panels of the garden door meet. This is the vanishing point, the spot upon which all the lines of perspective converge.

As well as providing a sense of spatial depth and a pleasing visual harmony to the scene, Veneziano's use of perspective adds to the symbolism of the Annunciation painting. All points converge upon the bolted door, left, that encloses the garden, an allusion to Mary's virginity. This, along with Mary's crossing of her arms over her chest, the bashful downturn of her head, her discreet, elliptical halo, the white lilies that the archangel Gabriel offers her, and the soft, delicate light that suffuses the painting, highlights the purity of the Virgin and stresses the sanctity of the event: Christianity's first vital moment.

related in conception and composition to the bronze relief of the same subject by Ghiberti on the tomb chest of St Zenobius in the cathedral at Florence, executed 1432-42

this and no. 1106 come from the predella of a signed altarpiece

Related in conception and composition to the bronze relief of the same subject by Ghiberti on the tomb chest of St Zenobius in the cathedral at Florence, executed 1432-42

This and no. 1106 come from the predella of a signed altarpiece 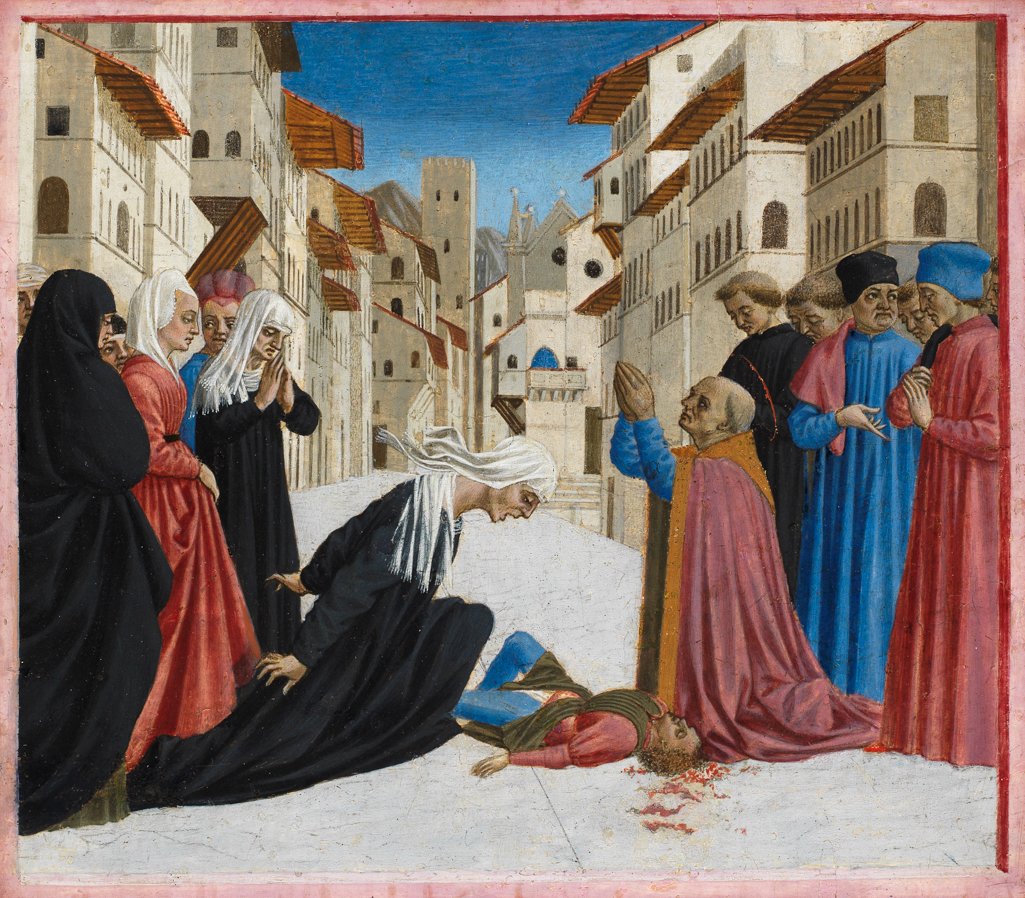