In this strikingly lit canvas, we witness the moment immediately after the apostle Judas has betrayed Christ with a kiss, the second before a rope is tightened around his neck and the Passion begins.

Guercino interprets this crucial event in the Christian story as an essentially human drama. There is a faint but significant halo to show Christ's divinity, but at the very centre of the canvas is a brightly lit square of flesh. This is Christ as a man, subject to the violence of the world and the vagaries of human friendship.

The jeering soldiers to the right – young, old and middle-aged – are vividly characterised. They are more obviously realistic than the grotesques who assault Christ in a late fifteenth-century Spanish painting in the Fitzwilliam [M.Add.16], but they are no less brutal.

The sense of motion on the right contrasts superbly with the awful stillness at the left of the canvas. While the soldiers snatch and snarl, Christ is seen in a pool of soft light leaning towards Judas. Violence is imminent but in this, his last moment of earthly freedom, he is calm and still.

What does the expression on Christ's pale, illuminated face convey? Shock? Sorrow? Resignation? Disappointment? Fear? His mouth is open as if in speech. His eyes look directly at his betrayer, but they seem to retain some compassion. Whatever else theologians, writers and artists thought of Judas, Guercino's Christ views him, one feels, with pity.

And what does Judas himself look at? Significantly he does not – cannot? – return his master's gaze. Is he looking at the rope that is about to go round Christ's neck, inadvertantly forming a halo? Or does he see the faint luminescence behind his head that identifies him as the Son of God? In this moment, does the traitor realise the enormity of his sin? He seems to recoil from the centre of the painting.

Judas here is not the ill-favoured villain seen in many medieval depictions of the betrayal of Christ. He is, in fact, a good deal less savage-looking than the guards who jostle Christ on the other side of the painting. This Judas is a simple, middle-aged man: his hair is going grey, lines are etched into his face. But the light from the lamp, that Guercino uses to such dramatic effect, illuminates his guilt by revealing the money bag clasped in his left hand, the thirty pieces of silver that he has been paid for his evening's work.

Guercino means squint-eyed, but his squint, the result of a childhood accident, clearly did not affect this remarkable artist's powers of observation. It seems that he was largely self-taught, although he was influenced by, among others, the great northern Italian painters Annibale Carracci and Guido Reni. Another painting by him in the Fitzwilliam, left [PD.216-1994], from 1617, shows the martyr St Sebastian, having been shot by arrows, succoured by two angels.

The Betrayal of Christ is one of a pair of paintings created for Bartolomeo Fabri of Cento in 1621. Its companion piece, a similarly dramatically lit account of The Incredulity of Thomas, is in the National Gallery in London. 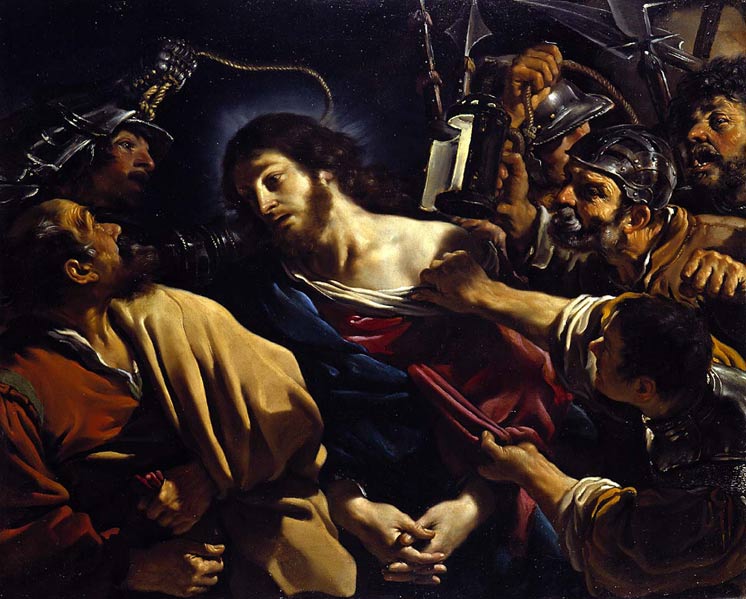