In 1421 Filippo Lippi, an orphan, was put into the care of the Carmelite monastery in Florence. He appears in their records until 1432. When he painted this small devotional image, therefore, early in his career, Lippi was one of a handful of Florentine artists who were both painters and members of religious houses. Lorenzo Monaco – literally 'Lorenzo the Monk' – was another. A Virgin and Child by him in the Fitzwilliam can be seen right [555].

Quite what effect his cloistered upbringing had upon Lippi is uncertain. Historical anecdote certainly credits him with some distinctly unchaste behaviour. He is known to have had a relationship with a nun, a union that bore him a son, Filippino, who himself became an eminent painter. And his greatest patron, Cosimo de'Medici, is said to have become so exasperated by Filippo's persistent drinking and womanising that he locked him up in his home to ensure that he concentrated on his work. The resourceful artist escaped by constructing a rope from sheets and lowering himself onto the street from an upper storey. But despite this anecdotal bad behaviour, Filippo retained the monastic title 'Fra' throughout his life and, apart from a small number of portraits, all his paintings have Christian subjects.

This small triptych – an altarpiece comprising three panels – has been dated to the late 1420s, a time of rapid and extreme change in the visual arts in Florence. It was then that the painter Masaccio was working in the Brancacci chapel, in the very monastery where Lippi was a friar. The frescoes Masaccio produced are remarkable for their apparent naturalism, for the unprecedented way in which they suggest three-dimensional forms upon a flat surface. The young Lippi might have been taught by this great master. A Virgin and Child by Masaccio, left, now in the National Gallery, London, bears comparison with the Fitzwilliam's triptych.

Lippi, like Masaccio, skillfully uses light and shadow to give volume and substance to his figures. Although some of this modelling has been lost from abrasion over the years, it can still be seen clearly in the figure of John the Baptist who stands on the left wing. Lit from the left, the right half of his face is cast into shadow, emphasising his sunken cheeks and unkempt hair. The same light source gives shape to his pink mantle – its creases and folds convincingly highlighted or shaded. This figure of St John is thought to have been inspired by the work of the great Florentine sculptor Donatello.

The figure on the other flap, lit in a similar way to St John, is likely to be St Ansanus, a fourth-century martyr and the patron saint of Siena. He wears a suit of armour and carries banner with a red cross, similar to that held by Christ in depictions of his Resurrection.

On the main panel, despite the predominantly gold background (much of which has worn away), the Virgin and Child are seated within a three-dimensional architectural space. Three classical columns behind them support a roof. These, like the flanking saints, are also lit from the left, their curved surfaces defined by gradations of light and shadow.

The altarpiece's comparatively small size suggests that it was commissioned for private use rather than for a church building. The likelihood of this is strengthened by the prominence of a donor figure in a red turban kneeling before the Virgin and Child (detail left).

A motto – Penses biem, 'Think carefully' – is inscribed on a scroll held in the mouth of an animal at the donor's left, and his coat of arms adorns the pediment of the altarpiece. Neither of these clues has yet revealed the man's identity, but a painting by Lippi of similar date in the Fondazione Cini in Venice, right, appears to show the same figure.

In the Fitzwilliam's triptych Lippi allows this man a position of rare privilege. In earlier paintings, donors were usually placed at some distance from the holy figures to whom they pray. Here Lippi's patron kneels at the very feet of the Virgin and remarkably, despite the clouds which suggest the separation of Heaven and Earth, he experiences a direct physical contact with the Christ Child himself.

The Madonna of Humility

Triptych with the Virgin and Child, St. John the Baptist and St. Ansanus, late 1420s 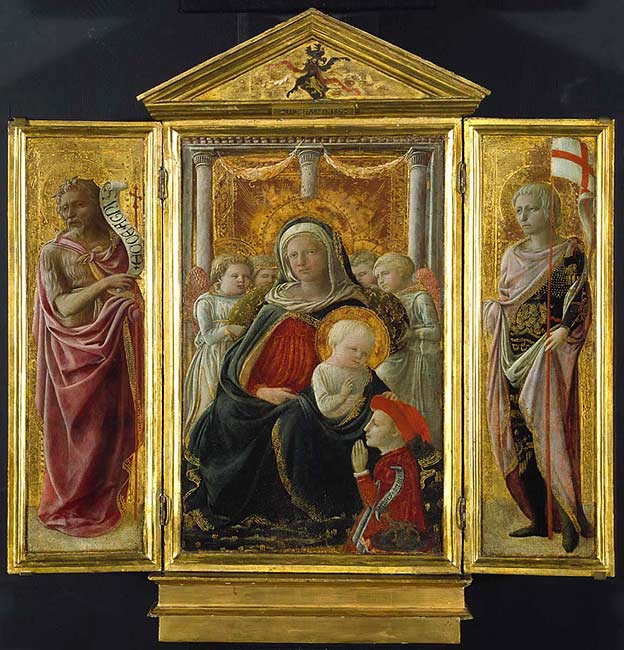