Though best known today as a portraitist of eighteenth-century English society, Thomas Gainsborough's self-confessed passion was for landscape painting.

A work in the Fitzwilliam, above [PD.3-1966], dates from around 1746 and shows his early brilliance in the genre. Heneage Lloyd and his Sister, an engaging mixture of landscape and portraiture, is characteristic of the work that the artist produced in his native Suffolk in the 1750s.

If a vertical line is drawn down the middle of the painting, the left-hand side is revealed as pure landscape: an imaginary parkland, probably inspired by contemporary French or Dutch art. Trees stand out dark against grey clouds. A church tower is just discernible within a coppice. Wood, building and sky are reflected in an immaculately still stretch of water.

The cloudy sky – an evocative mixture of blue, orange, green, grey and white – is perhaps the most striking element of the painting. Heavy rain has either just passed over or is about to break. Patches of the sun's brightness melt through the cloud, but the overall effect is dark. Gainsborough was an admirer of seventeenth-century Dutch landscape painting, and the influence of Aelbert Cuyp and his contemporaries can be seen here. Below is a work by Cuyp in the Fitzwilliam, Sunset after Rain [PD.115-1975], of which Gainsborough is known to have made a copy.

The two children are raised well above the water and divided from the landscape by an elegant stone staircase leading up to a rotunda. But while the two sides of the composition – portrait and landscape – are distinct, Gainsborough subtly balances them. The lighter patches of the sky are echoed in the girl's bonnet and the silvery sheen of her dress. The foliage beside the boy balances the trees at the left of the canvas.

The children are probably the son and daughter of Sir Richard Lloyd of Hintlesham Hall near Ipswich, a prominent lawyer and local politician. Heneage (1742-76) would grow up to become a captain in the Coldstream Guards. He is here shown arm-in-arm with his elder sister Lucy, who was born 1740.

There is an unignorable awkwardness to their pose. Heneage's right elbow is sharply bent to accommodate his sister's contrastingly limp left arm. Her forearm does not quite relate to her upper arm and shoulder. She leans towards her brother as though he is tugging at her, while Heneage himself seems to be almost sliding off the bank of earth upon which he sits.

Gainsborough was in his early twenties when he painted this picture and its apparent technical gaucheness can perhaps be put down to inexperience. He is known to have used lay figures – mannequins – in his studio when drawing the bodies of his sitters, and this might explain the doll-like appearance of these children. Other portraits from his early career display a similar awkwardness.

Yet Gainsborough was to become, and remain throughout his life, a brilliant and sympathetic painter of children. In the mid-1750s he created an unforgettable image of his own daughters chasing a butterfly, (now in the National Gallery, London). The painting of the Lloyd children may share a sense of the fragility of childhood with this work, and a similar gloomy background, but it entirely lacks the spirit of freedom and playfulness.

The junior Lloyds in fact more closely resemble the landowners Mr and Mrs Andrews in another famous early work by Gainsborough, also in the National Gallery, left. Are the bow and arrow held by Heneage and Lucy the juvenile equivalents of Mr Andrews' gun?

The shapes of their bodies may not convince, but the effect of their pale, childish faces against the dark cloud behind them is highly affecting. One senses a sympathy between the artist and his sitters. Children of a certain class were expected to grow up quickly in eighteenth-century England, and Heneage Lloyd and his Sister has something of the rather sad quality of a letter that the English politician Lord Chesterfield wrote, in Latin, to his son in the 1740s:

This is the last letter I shall write to you as a little boy, for tomorrow, if I am not mistaken you will attain your ninth year; so that, for the future, I shall treat you as a youth. You must now commence a different course of life, a different course of studies. No more levity: childish toys and playthings must be thrown aside, and your mind directed to serious objects. What was not unbecoming to a child, would be disgraceful to a youth. 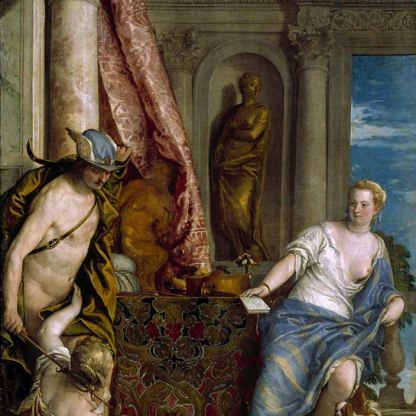 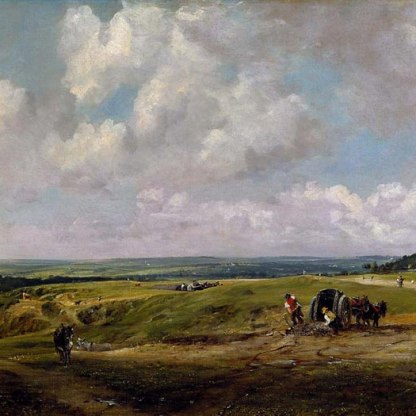 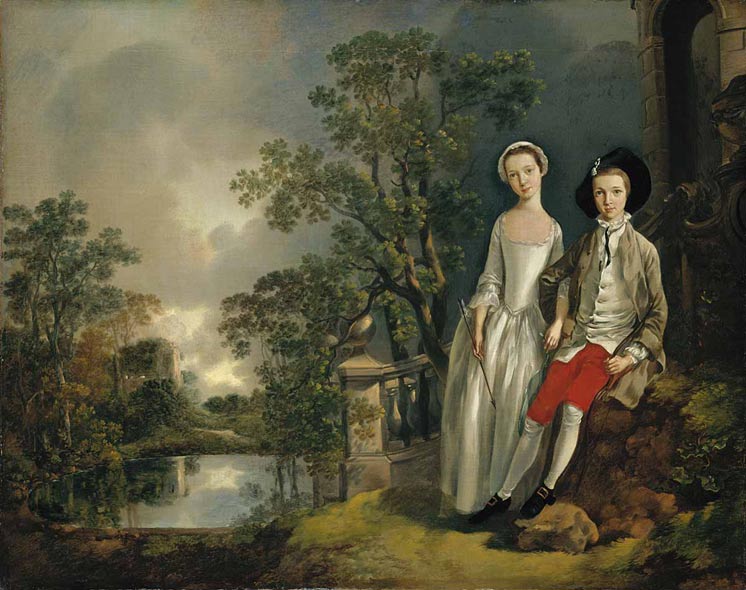