The artist of this Annunciation has never been firmly identified, but the wealth of detail, the elaborate architecture and the facial features of Gabriel and Mary identify it as a Northern European work of the early sixteenth century.

The technical and intellectual enthusiasms of the Italian Renaissance were making themselves felt in the north at this time, as more and more artists crossed the Alps to study the ruins of ancient Rome and works by great masters such as Michelangelo and Raphael. The resulting style came to be known as Romanism. This painting may be the work of Bernart van Orley, a leading Romanist from Brussels, hailed by his contemporaries as ‘the Raphael of the Netherlands'.

The fine detail and careful use of linear perspective give an air of naturalistic depth to the painting, but in every other way this is a highly artificial composition. Part cathedral, part boudoir, the interior in which Mary here receives the message that she is to bear the son of God never really existed outside the imagination of the painter. The architecture is a fantastic medley of elaborately carved pillars and high, broad arches.

The religious statuary, the stained glass windows, the candles hanging from the ceiling and the general sense of a wide, vaulted space are all suggestive of a church. But there are several distinctly non-ecclesiastical, domestic details: the white cat in the middle distance; the basket and wool at Mary’s feet; the canopied bed seen through an aperture to the left.

Although they illustrate the same event in the Christian story, there is a great visual contrast between this richly furnished interior depiction of Christ’s incarnation and the airy, alfresco rendering by Domenico Veneziano dated c.1445, also in the Fitzwilliam [1106].

All attention here is on Mary, and the very statues seem to acknowledge her importance. On the viewer's upper right, an anachronistic stone bishop leans forward from his niche to catch a glimpse of Christianity’s first vital moment. At the left, a statue in an elaborate feathery head-dress and armour looks towards the Virgin. He carries an ornate caduceus – the herald’s staff traditionally carried by Mercury, the messenger of the Roman gods. But this stone figure is dwarfed by the animated archangel Gabriel, the messenger of the Christian God, who carries his own golden sceptre.

In the the gloom above the middle arch stands a statue of Moses, recognisable by the Tablets of the Law that he holds, the text of the Ten Commandments. He is flanked by two roundels that seem to contain other Old Testament scenes: David’s fighting with a bear and Cain murdering Abel.

The message is traditional and clear: the events of the Jewish scriptures and the beliefs of the Greek and Roman pagans are, in this miraculous moment, superceded, overshadowed, cast into darkness by the coming of new Messiah. 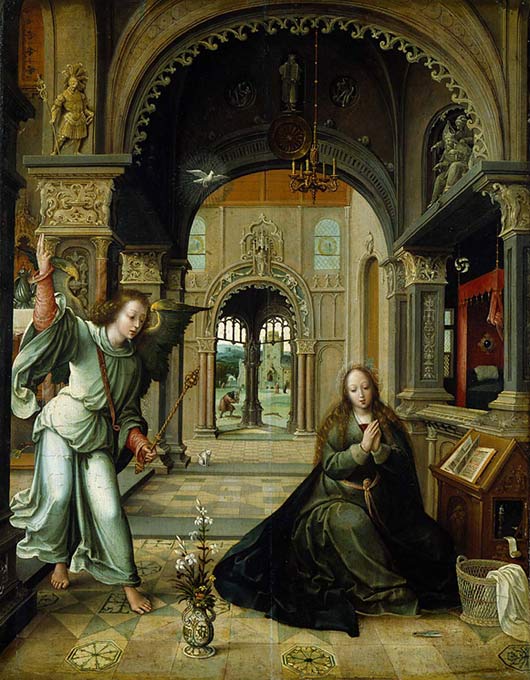