I am Ashurnasirpal, the obedient prince, the worshipper of the great gods, the fierce dragon, the conqueror of all cities and mountains ... the king of rulers, who tames the dangerous enemies ...

This large alabaster relief once decorated an interior wall in the great North-West Palace of the Assyrian King Ashurnasirpal II, in the city of Kalhu, today called Nimrud. The site lies forty kilometres south of Mosul, in the north of present-day Iraq. Ashurnasirpal was the first Assyrian king to decorate his palace extensively with sculpted stone decoration, a tradition followed enthusiastically by his successors.

Every wall panel carved for the king’s new palace bore the standard inscription from which the words quoted above come. The text details Ashurnasirpal’s kingly and priestly roles and lists his many military campaigns and achievements. The inscription is visible in the middle of this relief, detail left. It is written in cuneiform – the wedge-shaped script that developed around 3000 BCE in what is now southern Iraq.

Ashurnasirpal II, who ruled between 883 and 859 BCE, was one of the most successful kings of the Neo-Assyrian empire, a power that commanded the most important trade routes between East and West and which flourished between the ninth and seventh centuries BCE. The heart of the empire was northern Mesopotamia, the land between the rivers Tigris and Euphrates, but at its height, under Ashurnasirpal II, Assyria’s territories reached as far west as the Mediterranean coast and as far south as the Egyptian desert. The traditional capital had always been Ashur – also the name of the supreme Assyrian god. But in 879 BCE Ashurnasirpal II built a new capital city at Kalhu, and here, in his magnificent new palace, he recorded in stone his military victories, his dealings with his gods and his exploits upon the hunting field.

The winged man depicted on this relief is an apkallu ('sage'), one of several benevolent semi-divine beings who were believed to counsel and protect the Assyrian king. Several images of apkallu were placed near the entrances to rooms in Ashurnasirpal’s palace to ward off evil spirits.

Here the apkallu holds a banduddu ('pail') and a mullilu ('sprinkler') from which he dispenses water for purification. He is wears a horned crown (a sign of divine status), a tasselled skirt and robe. The pommels of two daggers stick out of a belt at his waist, and he is adorned with a necklace, earring and a rosette bracelet. These details would originally have been picked out with brightly coloured paint.

Perhaps the most distinctly Assyrian trait is the apkallu’s magnificently coiffed beard and curling moustache. There was intense interest in the Assyrian empire in England in the nineteenth century, after the archaeologist Austin Henry Layard had excavated Nimrud and brought the statues from Ashurnasirpal’s palace back to London. It has been suggested that the Victorian male fashion for long, thick beards may have been inspired by the luxuriant facial hair favoured by the Assyrian court. Would Edward Burne-Jones, for instance, left [778], as drawn by Charles Fairfax Murray in 1869, have looked as he did without the example of Ashurnasirpal II?

Relief from palace of Ashur-nasirpal II showing a sage with bird wings, anointing something with oil using a bucket and cone, royal inscription carved into relief.

Fitzwilliam Masked Masterpieces: Portrait of a Man in a Military Costume - Greetings Card 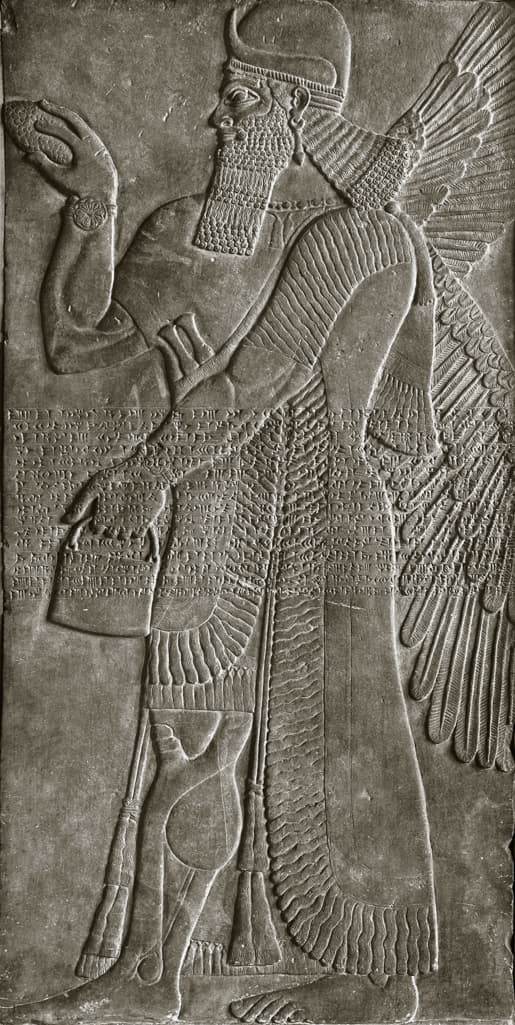