The faintly amused looking man on the obverse of this medal, left, is identified by the letters ER and ROT as Desiderius Erasmus of Rotterdam, the great classical scholar, satirist, theologian and translator of the Bible. Behind his head a Latin inscription informs us that this is 'an image taken from the life'. At the same time, in front of him, we are told in Greek that 'his writings will show him better'.

Erasmus is known to have respected and enjoyed the visual arts, and he may even have trained as a painter as a young man in a monastery in Gouda. But it is clear that, along with most other northern European humanists, he valued the written word above the visual image. His words, the medal tells us, will give a better impression of him than this portrait, lifelike though it is.

If the the portrait side of the medal raises questions about how best to express a man’s life – through writing or imagery? - the reverse, left, is devoted to death. Again, bilingual quotations surround a profile. On the left, in Greek, is the instruction,'Keep in mind the end of a long life.' On the right, in Latin, is the stark reminder, 'Death is the ultimate boundary of things.'

These solemn inscriptions surround an unusual-looking object. From the top of a pillar that stands in rough, uneven ground, emerges the head of a young man with a stubbly chin and wild, flowing hair. Like Erasmus on the other side of the medal, he seems to have a faint smile upon his face. On either side of the head are the words Concedo nulli – ‘I yield to no one.’ The pillar is inscribed 'Terminus', the name of a Roman god who presided over boundaries.

In 1509, while travelling in Italy, Erasmus had been presented with an ancient gem on which was engraved a figure of Terminus. So struck was he by this antique and its associations that he immediately adopted this obscure Roman god as his own emblem. Terminus became for him a kind of pagan patron saint, at once an alter ego and a reminder of his own mortality.

The adoption of the figure, and the accompanying slogan, Concedo nulli, led to accusations of 'intolerable arrogance' from Erasmus's enemies, who thought that he was setting himself up above his contemporaries. In 1529 he wrote a defence of his use of the Terminus motif and its motto. Although not directly associated with mortality in ancient Roman thought, Erasmus interpreted the boundary that Terminus marked as that which separates life and death. Concedo nulli, he said, was to be understood as death’s statement, not his own. And who could argue with the assertion that death is the terminus that yields to no one?

But despite these multiple reminders of mortality, the object as whole is an affirmation by the philosopher of his own significance. It is in itself almost a work of scholarship, with its inscriptions in classical Greek and Latin, and its arcane imagery. Doubtless Erasmus was sincere in his desire to never lose sight of death. But this medal suggests that he was keen that something of him would survive it. 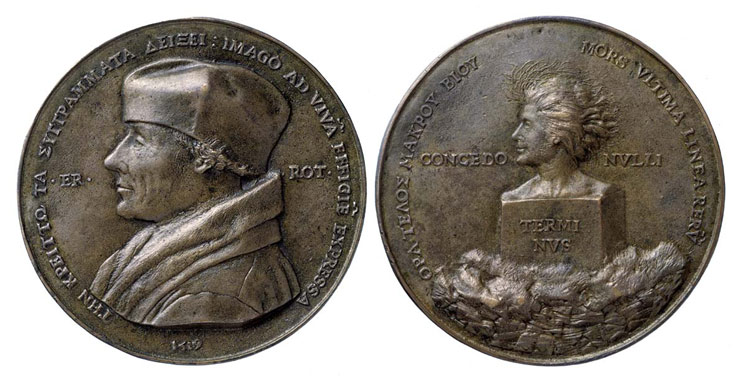