'This figure, I say, was much praised for a small thing...' Giorgio Vasari, Life of Rustici

Giorgio Vasari, in his biography of the Florentine sculptor Rustici, gives a detailed account of the circumstances in which this graceful bronze figure was made. His admiring description allows us to identify it as the Roman god Mercury, and we are able to glean something of its original appearance and setting:

When Pope Leo came to Florence in the year 1515, Rustici made, at the request of his close friend Andrea del Sarto, some statues that were considered to be very beautiful. Since they impressed Cardinal Giulio de' Medici, he had him make, for the top of the fountain that is in the great court of the Palace of the Medici, the naked bronze Mercury, about one braccio in height, standing on a ball and about to take flight.

In his hands Rustici placed an instrument that is made to revolve by the water that pours down from above: one leg being perforated, a pipe passes through it and through the torso, and the water, having risen to the mouth of the figure, falls upon the instrument, which is balanced with four thin plates fixed like a butterfly's wings, and causes it to revolve.

The remains of the engineering by which this charming effect was achieved can still be seen today. Mercury's lips are pursed into a nozzle and pierced with a hole. There are further apertures in his back, his lower right thigh and left heel.

The revolving instrument in his hand was probably the caduceus, the wand traditionally associated with this messenger god. We see him carrying it in a nineteenth-century bronze in the Fitzwilliam, left [M.3-1854], based upon a sixteenth-century original by the Italian sculptor Giambologna – a work that might have been in part inspired by Rustici's statue.

The caduceus and some wings were removed from Rustici's statue earlier this century in the erroneous belief that they were not original. The globe upon which the god stands today is a modern addition, and the right foot that balances upon it is a nineteenth-century replacement – an indication perhaps that the sculpture was forcibly torn from its original location in the Medici Palace courtyard.

Yet despite these losses and injuries, we can still recognise the quality that attracted Cardinal Giulio back in the early sixteenth century. For all his heavy musculature, there is an elegance to the figure, a sense of lightness, suggesting that he could indeed take flight at any moment.

Unusually for a professional artist in Renaissance Florence, Rustici was of noble birth and financially independent. But although this freed him from the need to ally himself to any one patron or workshop, Vasari tells how he 'attached himself' to Leonardo da Vinci, from whom he learnt the techniques of perspective drawing and bronze casting. The two artists are thought to have collaborated on some works.

Copper alloy, probably bronze, cast, and chased, mounted later on breccia ball and wooden socle. Mercury stands balanced on his right leg on a green and red breccia marble ball. His left leg is thrust out stiffly behind him. His left hand rests on his hip, and his right arm is raised, the hand shaped to grasp a slim rod held roughly horizontally. His head is thrust sharply back, the face turned upwards. His lips are pursed, and his mouth shaped as a nozzle pierced in the centre with a round hole (diam 6mm). In the centre of the figure's back is a large irregular oval aperture (7.8 x 3.7 cm) cast with a rebate designed to receive a closely fitted cover.

Bequeathed by the Hon. Mrs Pamela Sherek, from the collection of the late Lt Col. the Hon. M.T. Boscawen, DSO, MC, in his memory. 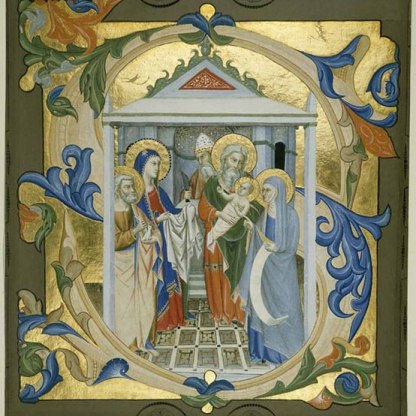 A figure of Mercury 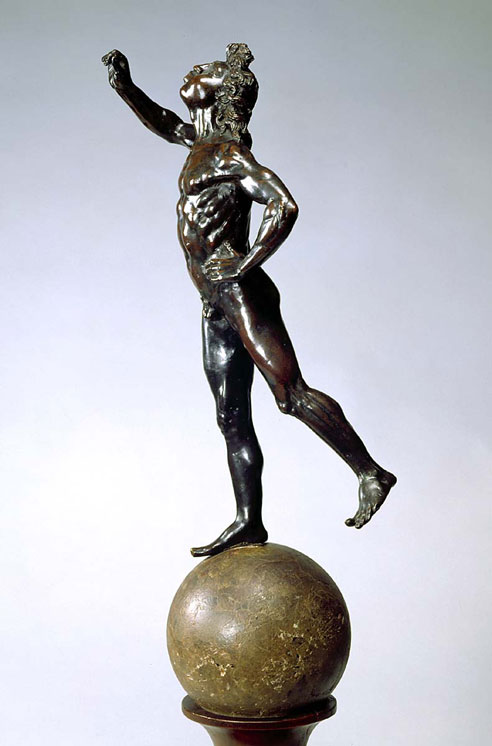