'When I the age of twenty had attained –
The age when Love controls a young man’s heart –
As I was wont, one night I went to bed
And soundly slept. But there came a dream
Which much delighted me, it was so sweet...'
Le Roman de la Rose, lines 14ff.

These lines come from one of the great secular works of the Middle Ages, Le Roman de la Rose – 'The Romance of the Rose' – a long poem in which a young man dreams of his love for a beautiful flower. The opening page of the Fitzwilliam manuscript, illustrated in the margin, shows the narrator embarking upon his dream adventure. We see him first asleep, the rose bush of his fantasies curling above him. Next he is shown getting washed and dressing, then wandering beside a stream, and finally, in the guise of ‘the Lover', approaching an enclosure within which his beloved is held (details below).

The Romance is over 21,000 lines long, and was written in French in two parts in the thirteenth century. The first, shorter section was composed in around 1230 by Guillaume de Lorris, about whom very little is known. It was completed about forty years later by Jean de Meun, a graduate of the university of Paris and a successful poet and translator of classical texts. On folio 19b, left, at the point in the text where he takes over as author, a miniature shows him working at a lectern.

'I know not how it comes, but blank dismay
So sorely troubles me that my heart fails.' (lines 4055–6)

The Rose is trapped within a walled garden and surrounded by a selection of personified abstractions who help the Lover, or thwart him, in his desire to pluck his beloved. At line 2070, for example, a 'lusty bachelor' called Fair Welcome exhorts him to leap over the wall to enjoy the flower's scent. We see this figure on folio 15r, left, dressed lavishly in a purple robe and scarlet cap, addressing the Lover, who stands before a wattle enclosure within which the rose tree blooms.

The rose is guarded, however, by Danger, Shame and Fear. This grim trio appears on folio 17 : Danger is an ugly, malproportioned old man, accompanied by two equally ill-favoured women. When, at the end of De Lorris' section, the Lover manages to steal a kiss from the Rose, Jealousy, an old woman, reinforces the battlements around the rose garden with her workforce of dwarves [folio 18r].

Jean De Meun’s interests were altogether wider and more scholarly, but when treating the actual theme of the young man’s love for the Rose, he was notably less delicate than his courtly predecessor. At the end of the poem, the Lover succeeds in penetrating the walled garden and consummating his love for the flower:

'This much more I’ll tell you: at the end,
when I dislodged the bud, a little seed
I spilled just in the centre, as I spread
The petals to admire their loveliness,
Searching the calyx to its inmost depths.' (lines 21717–21)

Elsewhere, the Lover’s quest gives De Meun the opportunity to expound upon a wide variety of philosophical topics: destiny and free will, wealth and justice, art and nature. He introduces many more allegorical figures. Reason, Nature and Genius all appear and give lengthy advice to the Lover. On folio 105v, left, we see Nature confessing to Genius, looking like a nun kneeling before a priest.

Perhaps most notable, for their satirical intent, are the figures of False Seeming and Forced Abstinence, represented respectively as a proudly corrupt Dominican Friar and a Nun. They appear on folio 76b.

Le Roman de la Rose influenced many other writers over the centuries. In the fourteenth century, Geoffrey Chaucer translated sections of it into Middle English as The Romaunt of the Rose. Edward Burne-Jones’s illustrations for William Morris’s beautiful nineteenth-century edition of the works of Chaucer show several episodes from this version. Left is one of Burne-Jones's sketches for the book in the Fitzwilliam [1050.37], depicting 'Fair Idleness and the lusty folk in the garden'. 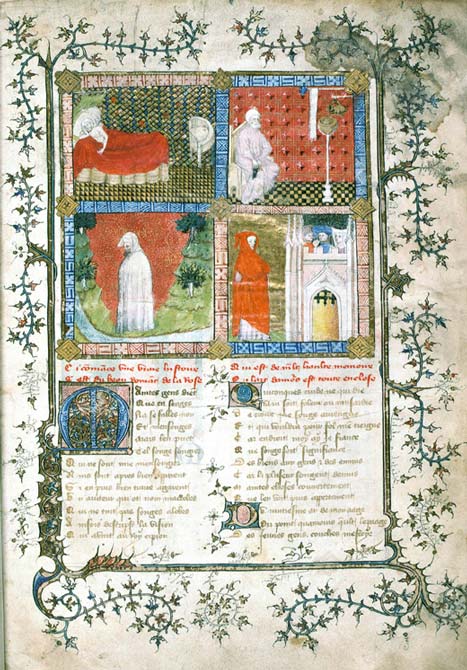