This lavishly decorated manuscript is a Pontifical, a book made specifically for a bishop, which contains all the services and ceremonies that someone of that office might be expected to perform.

Many indications of the original ownership of this particular volume have been deliberately removed. The heraldic shields that once occurred throughout, for instance, have been systematically scraped away and repainted, as can be seen left [folio 1r]. But clues within the decoration and the text allow us to identify Metz in north-west France as the diocese for which it was produced, and the owner as a member of the family of the dukes of Bar.

With this information, and the style of the decoration, which places the book in the early fourteenth century, it seems certain that the owner was Reynaud de Bar, bishop of Metz from 1302 until his death in 1316.

The first 62 pages of the Fitzwilliam's manuscript deal with the order of service for the consecration of a new church.

In folio 5r, left, we see a bishop, identifiable by his crozier and mitre, following a procession of people who carry a reliquary towards the new church. At the Council of Nicaea in 787 it became obligatory for an altar to contain relics before it could be consecrated. On folio 46r, right, we see the bishop inserting a certificate for the relics into an aperture in the altar.

Folio 7r, left, shows another stage in the consecration. Here the bishop purifies the lower parts of the building. In his hand we see the aspergillum – the brush used for sprinkling holy water. Behind him a deacon holds the stoup, or bucket, containing the water.

After the description of the rites concerning the consecration of a church, the book details the order of service for the benedictio – blessing – of abbot and abbesses. On folio 72v, left, the bishop is seen handing over a book to a new abbot. This is the volume that contains the rule of his order – the strict way of life prescribed for the monks under his charge, whom we see standing behind him.

At the time of his death, Reynaud had been planning an attack on the Duke of Lorraine, and it is thought that he was poisoned by his enemies. It seems that his untimely passing prevented the book being completed, for the illustrations on the last few pages are unfinished. Some are only partially painted, like that on the left [folio 111v]; others are merely sketched in (right) [folio 132v]. 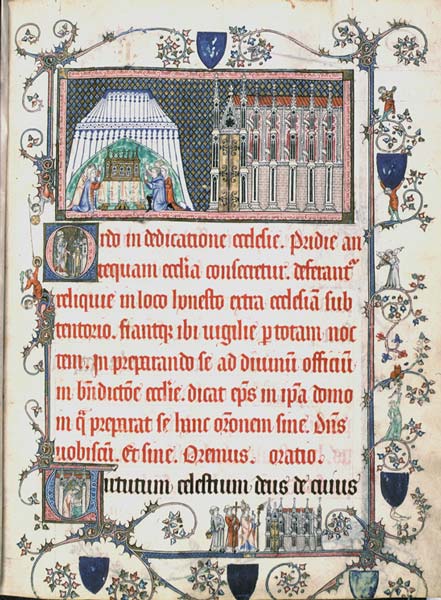