The first of these two works by the British artist William Hogarth owes much to a tradition of painting that developed in France in the eighteenth century, in which attractive young men and women flirt in idyllic outdoor settings.

A Pastoral in the Fitzwilliam, by Jean-Baptiste Huet, is typical of the genre – elegant, subtly sensual, full of easy charm.

Before shares these characteristics. In a shaded glade, a charmingly coy mistress makes a show of embarrassment at the advances of a handsome young gallant.

If one looks closely there are hints at what is to come: rosy apples tumble from the girl's apron, the young man's knee is suggestively placed – is that a bulge in his trousers that catches the light? But it is superficially all rather polite, and the physical realities of sex are discreetly hidden.

After turns all this on its head. Here the protagonists' clothing is in disarray and their faces flushed. The expressions that Hogarth gives the pair are superbly telling: the girl seems anxious and seeks reassurance from her beau, who stares into the middle distance, his face a mask of post-coital bewilderment.

The haste of their coupling is suggested by her stockings, which are still held up by their garters. Her mottled inner thighs are exposed and – most surprisingly – the man's unbuttoned breeches reveal a tuft of pubic hair and his penis, chafed red from its exertions.

Although all this is implicit in Before, where we know exactly what the young man is proposing, the candour of After is wholly unexpected. Not that early eighteenth-century England was a particularly sexually repressed society. There was a lusty literary tradition of which John Cleland's 1740s novel Fanny Hill is perhaps the most famous example. Prints were made of the sex scenes from that book, scenes which make After look restrained in comparison. But one simply does not expect such frankness in a painting of this period. Indeed when the work first came to the Fitzwilliam the man's genitalia had politely been painted over.

Is there a moral here? Is the girl in After, with her apples spread over the floor, to be seen as a fallen woman, a new Eve? Are we, as viewers, supposed to lament this hasty, opportunistic coupling? Or are we simply meant to be amused? To enjoy a witty subversion of a popular genre? Or even just a slightly smutty belly laugh?

There is no internal evidence in either painting to suggest that the couple's love-making will have any lasting consequence. Once they have got their breath back and rearranged their clothes, there is no reason to believe that either will suffer as a result of what has happened. But contemporary anxieties about the the vulnerability of young women were on Hogarth's mind in the early 1730s, when he was developing what he called the 'modern moral subject'. In 1732 he completed The Harlot's Progress, a series of paintings, later to become hugely popular prints, in which an innocent country girl is utterly ruined by the predatory attentions of London men.

The pair of paintings in the Fitzwilliam are perhaps more in the playful, comedic spirit of a poem, Pastoral Seduction, by the eighteenth-century Scottish physician Dr John Armstrong. Here a shepherd, Colin, tries to have his al fresco way with a bashful maiden, Daphne.

Colin:
My dearest maid, ah, be not thus unkind,
But taste the pleasures which in love you'll find;
Stay, Daphne, stay, the sun's meridian heat
Forbids to wander from this cool retreat.
Here, rest a while – the blue ethereal sky
Would shun the sparkling lustre of your eye:
How smooth this heaving breast, how soft, how white,
Which envious linen seeks to veil from sight,
Sweet panting twins, prithee do not resist,
Sure ne'er was maid so shy of being kiss'd.

Daphne:
Colin, for shame, you're rude; dear youth, forbear
How can you thus my fav'rite tucker tear?

Colin:
Fear not, sweet love, I'll loosen it with care.

She blushed consent - the youth with eager haste
His am'rous hands threw round her taper waist:
His burning lips with equal warmth she press'd,
And in her turn his manly form caress'd.

Thus Daphne, in the hands of this young glutton,
From tenderest lamb, became the veriest mutton.

The unexpectedly abrupt couplet at the end of this poem seems to mirror the unwonted explicitness of Hogarth's After.

Through the National Art Collections Fund 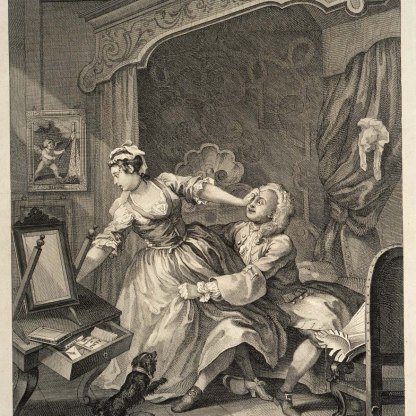 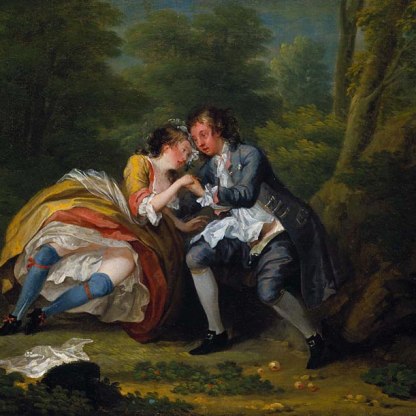 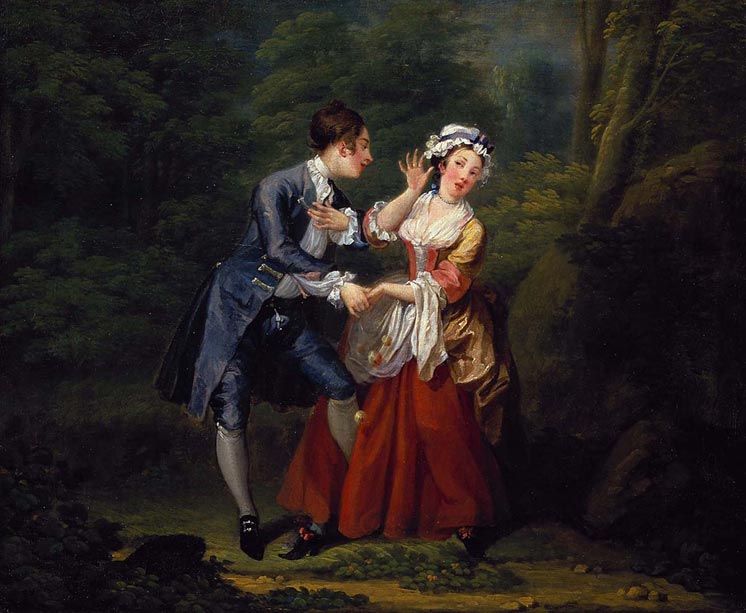