That landscape painter who does not make skies a very material part of his composition neglects to avail himself of one of his greatest aids. The sky is the source of light in nature and governs everything.
John Constable to Revd John Fisher, 23 October 1821

From 1819 John Constable, with his wife Maria and their young family, spent long periods in Hampstead, at that time a small village, quite separate from the city of London. Maria suffered from tuberculosis, and it was hoped that the clearer air in this elevated position would prove salutary. For Constable, the move provided the opportunity to acquaint himself with a new part of the English countryside. And on Hampstead Heath, the undulating plain that we see stretching out in this canvas, he found the perfect place to study the skies that play so important a part in his work.

Elsewhere in the letter quoted above, Constable describes the sky as 'the keynote' and 'the chief organ of sentiment' in a painting. The cloudy blue firmament here is less obviously emotive than, say, the brooding, stormy canopy in J.M.W. Turner's The Field at Waterloo [2476]. But Constable's sky dominates the Heath, and even unseen clouds make their presence felt.

The very bottom of the canvas is cast into a shadow that contrasts sharply with the fresh greens higher up. It is as if we are standing directly beneath a large cloud that blocks out the light above our heads. In the distance, the landscape is alternately light and dark according to where the sun breaks through.

As well as transforming the appearance of the landscape beneath it, the sky also influences the human activity therein: the men working in the foreground are carting gravel to fill in one of the shallow depressions where puddles would form after heavy rain.

While living at Hampstead, Constable made a series of oil sketches of the sky alone, each one marked with the date, time and a short description of the conditions. His interest in clouds was influenced partly by the work of the scientist Luke Howard, who had in 1803 written a pioneering study, classifying different types of cloud according to their shape.

The early nineteenth century was a Golden Age of landscape painting in Britain, and Constable and Turner were the two leading exponents of the genre. But while Turner travelled widely both abroad and within Britain to find subjects, Constable restricted himself to comparatively few locations. He generally painted the places in which he found himself living at the time. He once wrote that 'painting for me is but another word for feeling', and in his work we can discern a passionate love of the English countryside. He was raised in rural Suffolk, and throughout his life he produced images that remain among the most brilliant of that much-painted county. A work in the Fitzwilliam [PD.15-1968] shows a view of East Bergholt, the village in which he grew up.

In 1829 Constable began working with the young printmaker David Lucas on English Landscape Scenery, a series of mezzotints based upon his paintings. On the left is an image of Stoke-by-Nayland in Suffolk, near to where Constable was raised. Right, you can see an atmospheric depiction of Stonehenge on Salisbury Plain.

From the Marlay Fund with a contribution from the National Art Collections Fund. 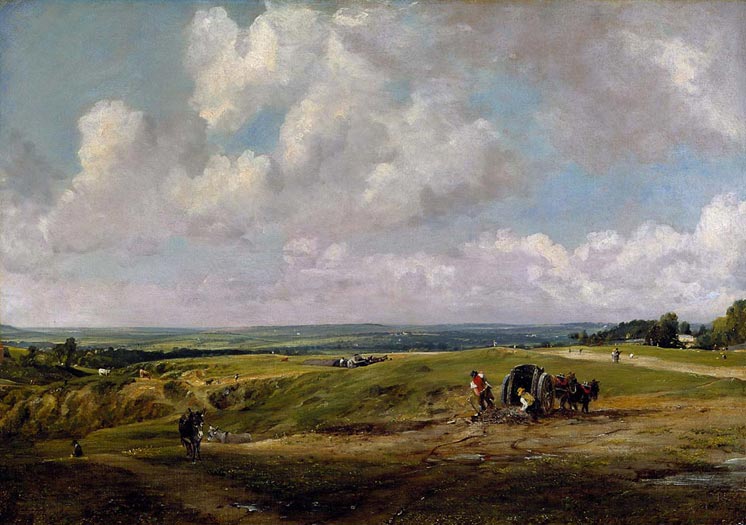