Edward Towry Whyte's connection with Cambridge was established during his time as an undergraduate at Pembroke College (BA, 1870, MA, 1873). Although he worked professionally as an architect he had a great interest in archaeology and Egyptology. He travelled in Egypt on a few occasions and published a number of articles on Egyptian antiquities. He was also a long-time committee member of the British School of Archaeology in Egypt.

He spent much of his time poring over hieroglyphic inscriptions and in the late 19th century he painstakingly produced a list of all the ancient Egyptian kings names of the museum that were known at the time, each cartouche inked and painted in watercolour. This is now kept in the archive at the University of Cambridge's Asian and Middle Eastern Studies Library archives.

In 1939 he made a bequest of 453 small Egyptian antiquities to the Fitzwilliam Museum. These were objects he had mainly purchased through auction houses in Britain but other objects were acquired from Egyptian dealers. A beautiful hand-written catalogue that included watercolours of many of the artefacts accompanied this corpus of material. These include the wooden stela of a chantress of Amun (E.264.1932) in case 11, gallery 19.

Whyte's nephew, Sir W.P. Elderton also presented the museum with objects that he had inherited from his uncle, together with objects he had collected himself, following the inspiration of his uncle. Amongst the 94 Egyptian objects retained by the museum are a number of beautiful artefacts including a Late Ptolemaic Period statue of the goddess Taweret (E.22.1955) which can be seen on display in case 13, gallery 19. The sale of the other items from this collection objects that were duplicates of types of material already held by the museum raised revenue to establish the Elderton Fund which has allowed the museum to purchase items to fill gaps in its collection. 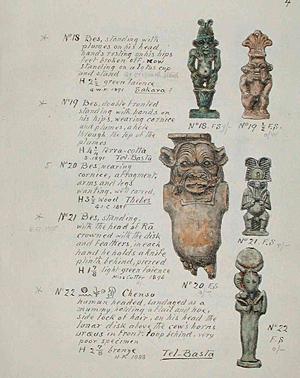