The betrayal of Christ by Judas, at night, with a kiss, in the Garden of Gethsemane, surrounded by soldiers and apostles, is arguably the most dramatic moment in the Gospel narrative. It is one of the first scenes of Christ’s Passion to have been represented in art.

Verily I say unto you, one of you which eateth with me shall betray me.

And they began to be sorrowful, and to say unto him one by one, Is it I? And another said, Is it I?

And he answered and said unto them, It is one of the twelve, that dippeth with me in the dish.

Judas is usually set apart from the other apostles around the table. In a miniature from a Latin poem on the life of Christ, [MS.259.f.11r], written and illuminated in England in the fourteenth century, he crouches on the floor in front of the table, as the other apostles gaze anxiously at Christ, who has just announced his imminent betrayal. All the men sitting around the table have haloes. Judas’ receding red hair is unadorned.

There is no description in the New Testament of Judas’ physical appearance, but it became traditional for artists in the middle ages to represent him with red hair, what Shakespeare described as ‘the dissembling colour’. It was a physical trait that had long been associated with treachery. In ancient Egyptian mythology Seth, the killer of Osiris was sometimes characterised by red hair, while other biblical villains – Cain, murderer of his brother Abel, and Salome, who had John the Baptist executed – were also reputedly redheads.

The evil within Judas is more explicitly displayed in an illumination from a thirteenth-century German psalter in the Fitzwilliam [MS.36-1950.f.72v]. The setting is the Garden of Gethsemane, at the very moment that Judas kisses Christ to identify him to the arresting soldiers. Judas is a mere youth here, ruddy-cheeked with curly hair, not so very different from the other younger apostles who look on. He wears a troubled expression and again he has no halo, but what really gives him away is the black face of a devil grinning directly above his head.

There is a dramatic, and unusual representation of the events in the Garden of Gethsemane in a Book of Hours made in Paris c.1525, in the Fitzwilliam [MS.134.f.36r]. Christ stands up, his right hand held in a gesture of blessing, while assorted figures lie on the ground at his feet. There are solders and lamp-bearers similar to those we see in Guercino’s painting, and at the lower left we see Judas, on his knees and leaning backwards, holding one hand to his face as he clutches a heavy moneybag in the other.

The incident depicted is reported in St. John’s Gospel, 18, 4–6. Judas and the arresting officers have arrived at the Garden of Gethsemane:

On folio 10v of the same Latin poem on the life of Christ mentioned above, we see Judas’ initial dealings with the chief priests of the Jews, for whom he acted. In Matthew's Gospel, 26, 14–15, we read:

Then one of the twelve, called Judas Iscariot, went unto the chief priests, And said unto them, What will you give me, and I will deliver him unto you? And they covenanted him with thirty pieces of silver.

The unkind-looking priests here almost seem to be forcing the bounty upon Judas. A few pages later in the same book, folio 15r, they appear again as the remorseful Judas hurls the money onto the floor before them. The artist has conscientiously denoted exactly thirty coins tumbling from the bag. Judas’ repentance has here finally earned him a halo, but it has come too late. His crime has been committed, and on the right-hand side of the page, we see his suicide, hanging from a tree, blood dripping from his belly.

Jews in the synagogue, by Rembrandt 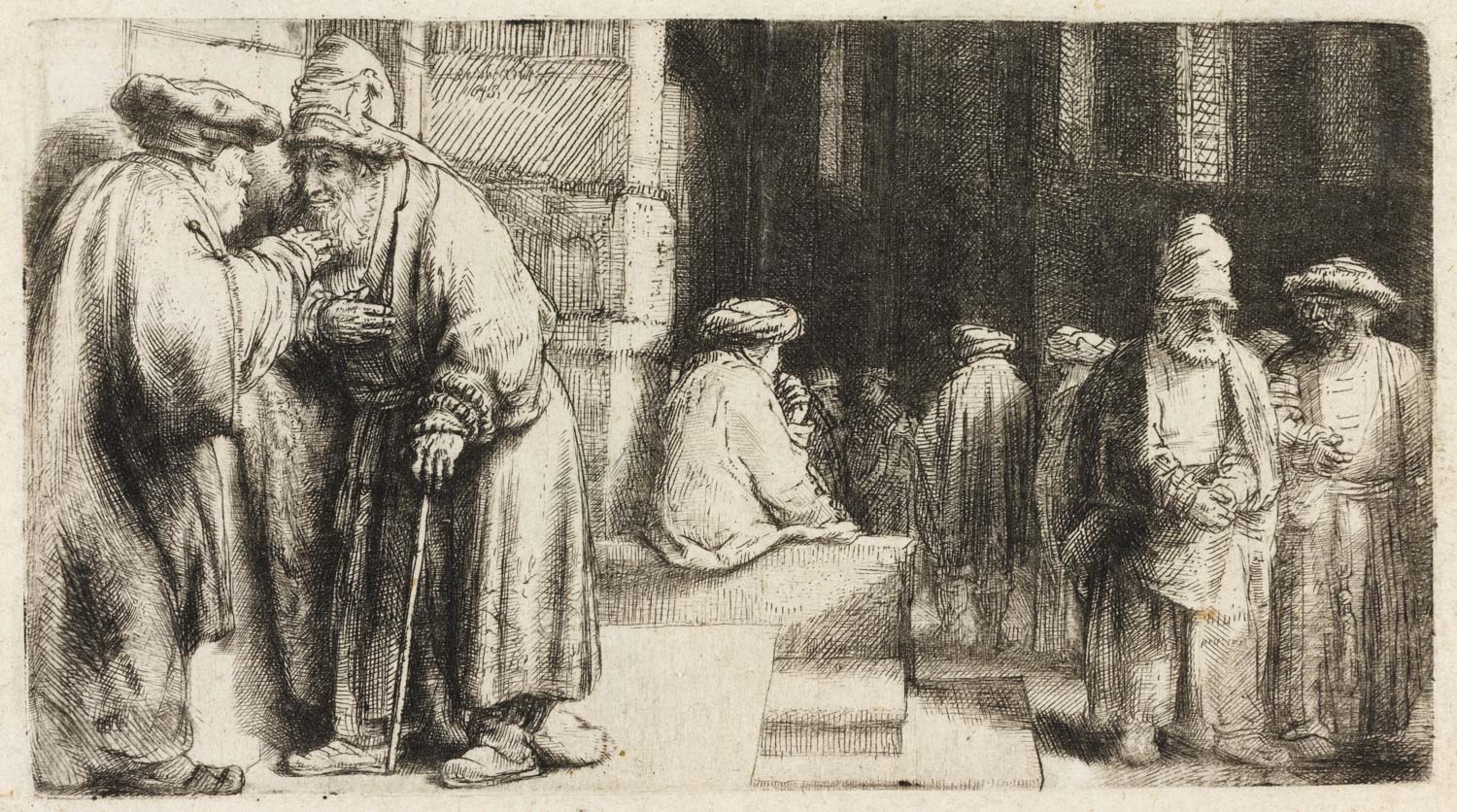