In the New Testament, Christ is tempted three times by Satan during the fourty days that he fasts in the wilderness, and each time he resists with a quotation from the scriptures. For Milton and Blake, this self-denial and ability to withstand temptation put right the sin of Adam in the Garden of Eden, when he ate the forbidden fruit from the Tree of Knowledge and Paradise was lost.

A print, left, by the Dutch artist Rembrandt, made in 1638, shows the lead up to this catastrophic Old Testament moment of weakness, [AD.12.38-114]. In the background an elephant trots along, suggesting a wild, innocent, still unspoilt Eden. Adam seems to be warning Eve not to bite the apple that is already halfway to her mouth. He puts one hand between it and her lips, and holds his other hand up in warning. But a monstrous serpent observes them, clinging lizard-like to the trunk of the tree. An apple seems to hang from this creature’s very mouth, while another is in easy reach of Adam's raised left hand. It is only a matter of time before he succumbs to temptation.

With Christ as their model, many saints also faced and survived trials of will, particularly those who led the life of the hermit. One of the most celebrated of these, and a popular subject of medieval art, was Antony the Great, the third/fourth–century desert father. A celebrated print by the fifteenth-century German artist Martin Schongauer, below [1879.5.24-73], shows his temptation by demons more as a full-on physical assault than an attempt at persuasion.

A flock of grotesque composite beasts have lifted the celebrated ascetic into the air where they beat him with clubs, pull his hair and sink their claws in to him. He in turn stares calmly out at the viewer, unperturbed, heroically stoical.

Antony was also said to have been plagued by erotic visions. It was the bane of many hermits’ lives, among them another great monastic founder, St Benedict (c.480–c.550). Dismayed at the carnal pursuits of his fellow Romans, the young Benedict retired to a wilderness in Italy to devote his life to prayer and contemplation. But the memory of a beautiful young woman he had known back home haunted him. He was on the point of giving up his life of self-denial and seeking out the subject of his fantasies, when he spotted a thicket of briars. Stripping off his garments, he rolled naked in the prickles until his whole body was lacerated and his lust had abated.

The Temptation of St Benedict in the Fitzwilliam, by the sixteenth-century Florentine artist Alessandro Allori, shows a handsome, well-built young man lying on a bed of thorns as he intently reads a Bible, [PD.19-1996]. A skull props up his book. In the background three monstrous temptresses, their eyes glowing red, are routed by his piety.

Saints are of course not the only mortals to encounter temptation. Alfred Elmore’s painting On the Brink [PD.108-1975], shows a young woman who has lost everything at a gaming table. From the shadows emerges her tempter – a young man who will cover debts, but at what price? There is something of the serpent in the Garden of Eden about this shadowy roué. 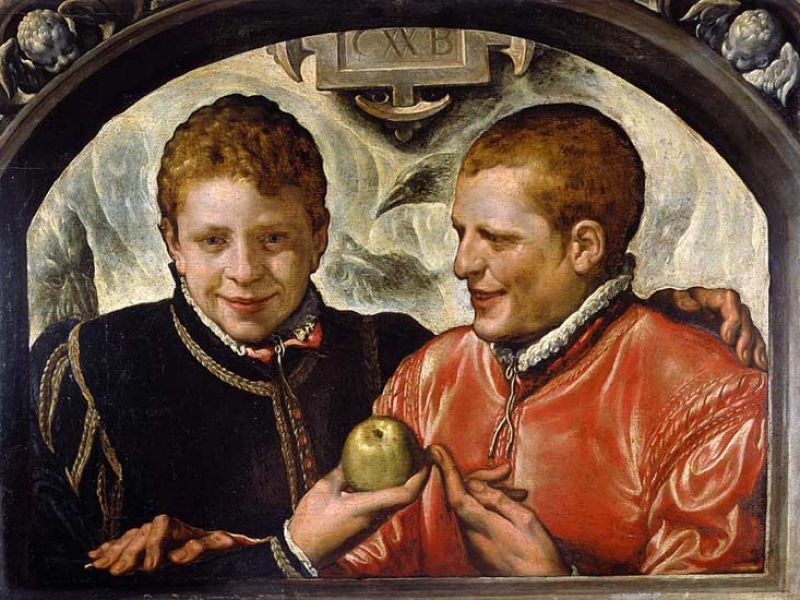 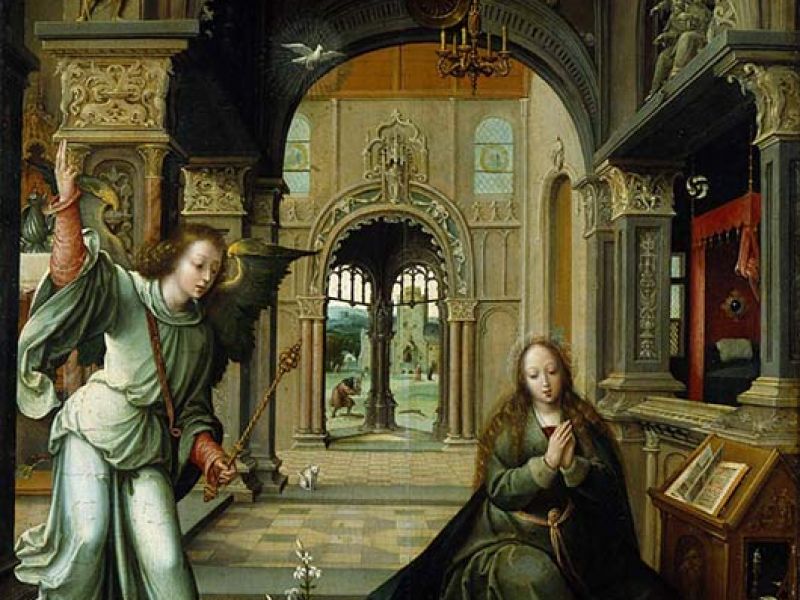 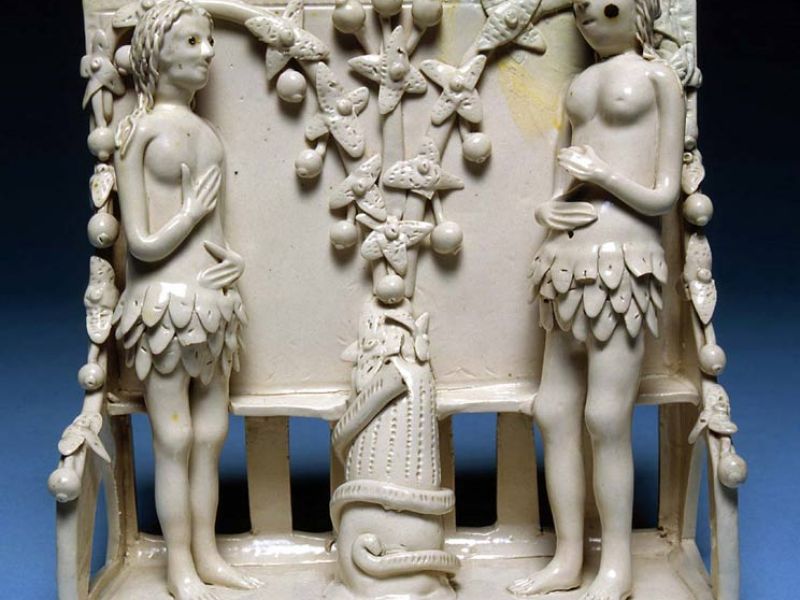 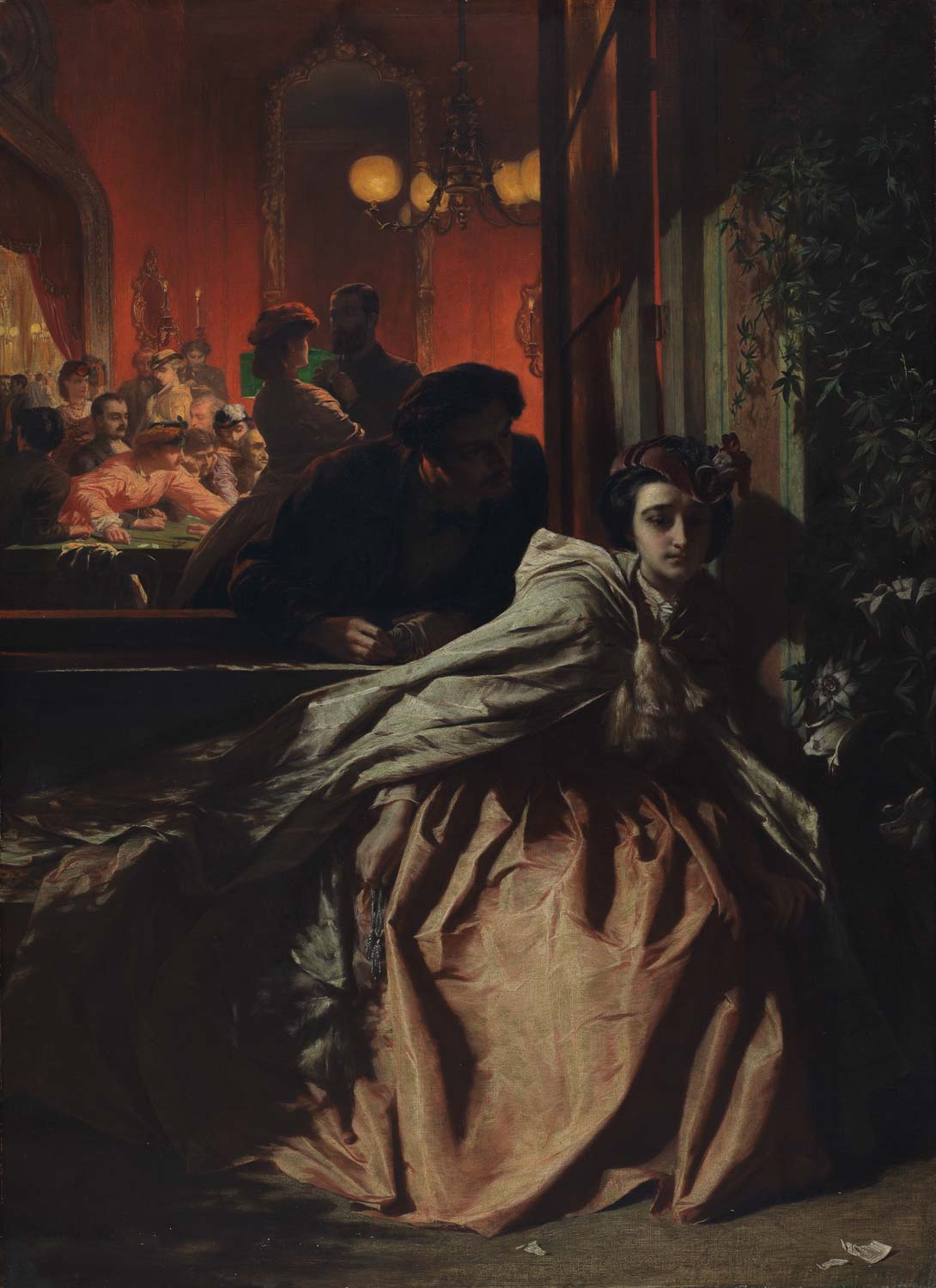