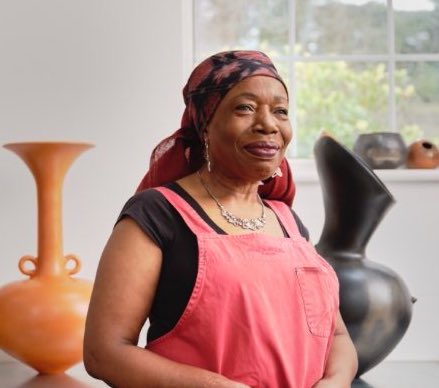 Magdalene Odundo DBE is one of the greatest ceramic artists working today. Her instantly recognizable vessels are unique, each one with its own personality. Reminiscent of the curves of the human body, they seem both ancient and modern. Although imbued with traces of artistic traditions from around the world, Odundo’s work remains resolutely her own.

Born in 1950, in Nairobi, Kenya, she received her early education in Kenya and India before becoming an apprentice in Commercial Art and studying part-time at Nairobi Polytechnic. After a short period working as an assistant designer with Kenya Neon Signs, Nairobi, Odundo travelled to Cambridge in 1971 to attend a Foundation Course at Cambridge School of Art. Planning to focus on graphic art, she was inspired instead to work in clay by her pottery teacher Zoë Ellison (b. Rhodesia, now Zimbabwe, 1916; d. Cambridge, 1986). After Cambridge, Odundo studied for a degree in ceramics at West Surrey College of Art and Design, now the University for the Creative Arts, Farnham, and subsequently for a master’s degree at the Royal College of Art, graduating in 1982. In 1974, she became apprenticed to potters at the Abuja Pottery Training Centre in Suleja, Nigeria.

Based in Surrey for the last 40 years, Odundo has continued to make her distinctive, burnished vessels, to great acclaim. Her works have appeared in solo and group exhibitions around the world and feature in almost 50 museum collections. Odundo has also successfully balanced making with teaching, spending fourteen years as Professor of Ceramics at the University for the Creative Arts prior to her appointment as Chancellor of that University in 2018. In 2020, she was appointed DBE for services to art and arts education. 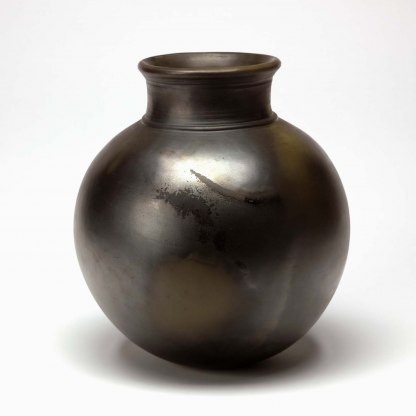