Between Christ’s arrest and his Crucifixion, the Gospels tell how he was tormented by the soldiers of Pontius Pilate. Juan and Diego Sanchez here give a stark account of the brutality he suffered at the hands of his captors.

The sense of conflict and tension in this painting is reflected in its composition, which is split diagonally by the upright of Christ’s cross. This emphatic division stresses the contrast between the serenity of the suffering Christ and the physical exertions of his tormentors.

On either side of the wooden bar are a series of opposites.

Two faces make eye contact with the viewer. Christ's features are gentle if tragic while the executioner is wild-eyed, almost haunted-looking. The curious, mask-like expression of this man is matched by the monstrous face on the shield at the far right.

The haloed heads of Christ and St John contrast with the heavy helmets of the soldiers. A grotesque, sneering guard punches Christ’s head while the youthful, serious John, right, gently supports his body. Christ falls almost passively, while the man at the other end of the rope strains to drag him up.

Further up, in the background of the picture, the same diagonal separates the group of the soldiers and the two thieves who are also to be crucified from the three mourning women - the Virgin Mary, Mary the mother of James, and Mary Magdalene - as they emerge from Jerusalem.

Though not actually made in northern Europe, this unsettling work owes a large stylistic debt to that part of the world. When Juan and Diego Sanchez painted this panel, northern European artists were exercising a particularly strong influence on their Spanish counterparts. The guard with his bulbous nose who punches Christ’s ear, and the gnarled face of the old soldier behind him, recall the grotesque tormentors in The Mockery of Christ, by Hieronymous Bosch, a Flemish artist who was particularly admired by Philip II of Spain. This now hangs in the National Gallery in London, right.

More distinctively Spanish is the use of gilding and embossing on the haloes and shields. The artists have included labels here to identify the figures. On John’s halo we read 'IOHAMES APOST'. The shield on the left of the picture reads 'SAMADORES PUEBLOS', a Spanish version of the Latin words senatus and populus, the Roman Senate and people, those responsible for putting Christ to death. The words on the shield at the right – 'OUMOA LAONESTU' – are apparently meaningless.

The helmet and weapon from a roughly contemporary suit of Spanish armour in the Fitzwilliam, left, resemble those worn and carried by the soldiers here.

From a religious house in the province of Cordova; with the Spanish Art Gallery, London (Lionel Harris), by 1913, whence it was bought 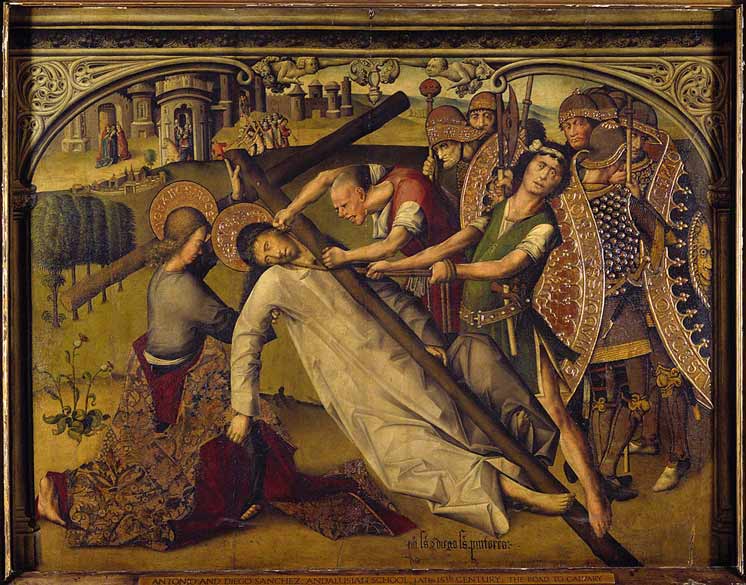