The figure depicted here, boldly wrestling a giant fish, is Rokusaburo the Carpenter, the hero of a popular Japanese Kabuki play. An inscription on the left of the print identifies the character, whose features are recognisably those of the revered actor Ichikawa Ichizo III. This print was made to publicise his forthcoming performance of the role at the Morita Theatre in Edo (modern Tokyo) in July 1858.

Kabuki had developed from a type of folk dance performed by prostitutes in the seventeenth century, into a sophisticated and hugely popular art form by the nineteenth. It originated in Kyoto, but by the time this print was made Kabuki’s main centre was Edo, more specifically the Yoshiwara district. This was the pleasure quarter of Edo, the hub of what was called ‘the floating world'. Here were brothels and teahouses, restaurants and puppet theatres. The majority of prints produced in Japan between 1603 and 1868, when the Edo period ended, depict scenes of this urbane, carefree way of life. They are known as ukiyo-e – 'pictures of the floating world'.

Kabuki actors were icons within this society. Since 1629, only men had been allowed to perform in Kabuki plays, and this led to development of onnagata – actors who specialised in female roles. Despite periodic attempts by government reformers to suppress what they considered to be an immoral form of entertainment, Kabuki thrived.

On the left is a work by the great nineteenth-century printmaker Utagawa Hiroshige, depicting Saruwaka Street in the moonlight. This thoroughfare was at the heart of a new theatre district that had been built after a fire in 1841 had destroyed the old playhouses. It was named after Saruwaka Kanzaburo, who had introduced Kabuki to Edo in 1624. On the left of Hiroshige’s print are the teahouses that catered for the theatre-goers. Waitresses can be seen talking to clients on the platforms along the front.

To the right are three Kabuki theatres, each topped with a turret, the sign that they were government-licensed venues. The Morita Theatre, where Ichikawa played Rokusaburo, can be seen at the extreme right of the print. Beyond it are the Ichimura Theatre and the Nakamura, the oldest Kabuki establishment in Edo. The street appears relatively quiet, and the scene might depict a lull before the new season of performances began.

Kabuki plays lasted for hours and often involved elaborate staging. The carp-grappling scene depicted here would have taken place in an on-stage water tank, the fish itself represented by an elaborate and carefully constructed prop.

Audiences could become very involved in the action. In 1856, the actor depicted here was at the centre of a real-life drama at the Morita Theatre, when a samurai warrior became so absorbed in the action that he drew his sword, leapt onto the stage and made to attack him. Several people who ran to the actor’s aid were killed, but Ichikawa himself survived to act another day. The event cannot have harmed his reputation.

Kunisada was one of the most prolific printmakers in nineteenth-century Japan, and most of his works depict Kabuki actors, several of whom were personal friends of the artist. The cartouche, left, in the lower right of the print, contains his signature: Toyokuni ga. Toyokuni was a name that Kunisada had inherited from his teacher; ga means 'drawn by'. Right is an early triptych by the artist in the Fitzwilliam [P.214-1955], depicting a legendary sumo wrestling match between Matano Goro Kagehisa and Kawazu no Saburo Sukeyasu. This fight was often re-enacted as a preface to Kabuki plays about Kawazu and his sons. 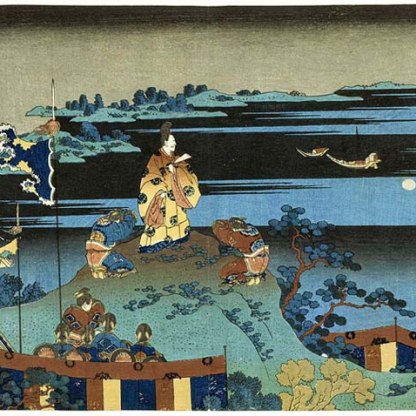 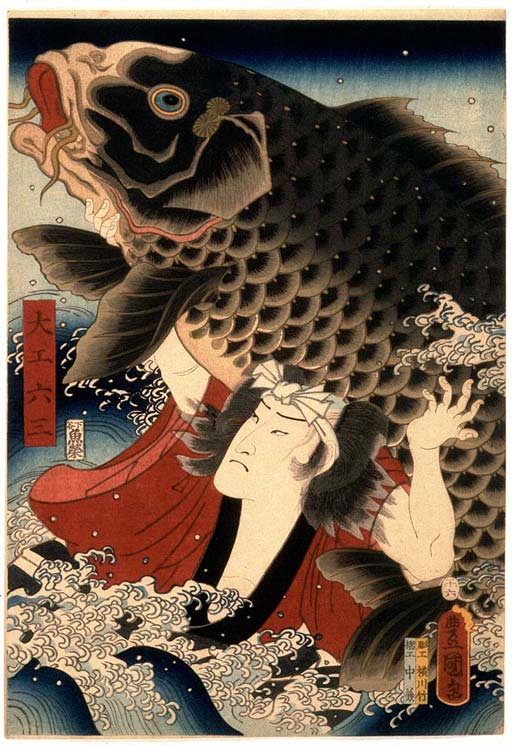