Ramesses III has been described as the last of the great warrior kings of Egypt. There was turmoil in the Near East during his 31-year reign – the Trojan War is thought to have been fought at this time – and Ramesses himself faced violent invasions from a race known as ‘the sea peoples'.

His struggles against, and eventual victory over, this enemy – a confederation of disparate eastern Mediterranean tribes – are recorded in word and picture on the walls of his great temple at Medinet Habu. Above is a watercolour by G. F. Weston in the Fitzwilliam, [1628], showing how this great temple looked in the mid-1840s.

Wall-paintings here show a larger-than-life size Ramesses III, crushing the foreigners who would take over his country. He defeated them on land and sea and they never returned. But Ramesses also faced incursions on the western border of Egypt from Libyans, whom he also crushed in battle.

A large papyrus survives from Ramesses’ reign that provides a fascinating insight into the intrigues of the Egyptian court. Known as ‘the Harem Conspiracy Papyrus', it details the trial of a faction, led by one of the Ramesses’ wives, who had plotted to murder him.

The conspirators were all tried and either executed or forced to commit suicide, but Ramesses himself appears to have died before the trial was complete – it is unclear whether this was as a direct result of the plot.

His embalmed body – once protected by the Fitzwilliam’s sarcophagus lid – is one of the best preserved royal corpses to have survived from ancient Egypt. It was the model for Boris Karloff’s undead character in the 1932 film, The Mummy. Today it rests in the Cairo Museum. 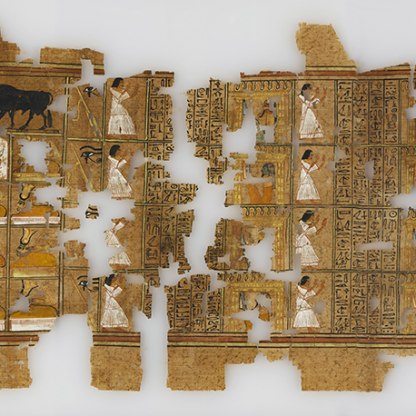 The Sarcophagus of Ramesses III